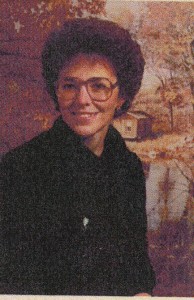 Sharon C. Smith is married to James W. “Bill” Smith and they have been married for the past 46 years. Sharon is survived by her husband Bill, daughter and son-n-law, Sheri and Dr. Richard Creed of Oklahoma, Granddaughter Courtney Daniel of Oklahoma and Grandson Clayton Daniel of Ozark, Aunt Jody Cole of Springfield and Sharon’s little Red Dog “Baby” also known as Suzzy. She was preceded in death by her parents Stanley and Lois Hough, her sister Becky Hough, brother Stanley son David.
Sharon was born in Springfield, Missouri and graduated from Park View High School. She traveled all over Europe and lived in many exotic locations. Sharon and her husband retired in Highlandville, Missouri where she attended church at Highlandville Baptist. Sharon thought of others first, gave generously to charity including the Joplin Tornado Victims where she also volunteered her time during the cleanup. The majority of her life was spent working with small children and taking care of others. She was patient, kind, loving, and forgiving. Sharon had the most beautiful smile and was the best mother anyone could hope to have. Sharon Smith is now with Jesus and her family is thankful for the time they were privileged enough to share with her on earth. A memorial service will be held on Monday February 1, 2016 at 11:00 am in Highlandville First Baptist Church, Highlandville, MO. Burial will follow in Missouri Veterans Cemetery.