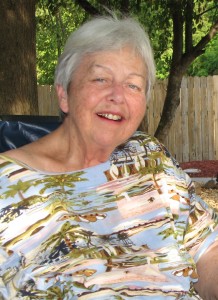 Shirley (Shirl) Ann Lindsay 77, of Springfield, Missouri passed from this earthly life to be with her Heavenly Father on Tuesday, May 5, 2015.
Shirl was born on April 6, 1938 in Norwood, Missouri to Clarence and Anna Raney. She graduated from Norwood High School in 1956 and attended Missouri State University. She married James (Jack) Lindsay on October 23, 1955.
Shirl directed church music for 27 years at several Southern Baptist Churches throughout Greene County. She also worked and coordinated craft classes for Hobby Lobby, Ben Franklin and Country Merchant.
She was preceded in death by her parents Clarence and Anna Raney;
1 sister and 5 brothers. She is survived by her loving husband of 59 years Jack Lindsay of Springfield and 3 children. Kem Lindsay and his wife Carol of Gastonia, North Carolina; Jacqua Garrison and her husband Kevin of Springfield, Missouri and Dawn Lindsay of Bolivar, Missouri; 7 grandchildren, a great grandson and a special niece and nephew.
Shirl loved to create and she used crafts, floral arranging, cake decorating and sewing to express herself and show her love for others. She enjoyed many family vacations at the beach. Shirl was a special wife, mother and grammy.
A memorial service is planned at 10:00 A.M. Saturday, May 9, 2015 at Greenlawn Funeral Home East with burial following at Rivermonte Cemetery. Visitation will be from 6:00 to 8:00 P.M. Friday, May 8, 2015 in the funeral home.