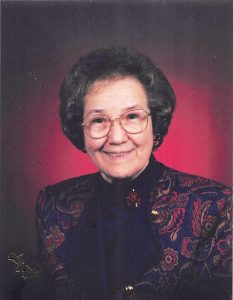 Shirley Dortha Hosey, daughter of Homer and Bessie Crawford, was born in Texas County near Bado, MO on January 27th, 1921 and departed this life on September 6, 2016 while residing at Ozark Riverview Manor. Dortha graduated with honors from Houston High School in 1939. She Taught in a one-roomed-schoolhouse in Oak Grove from 1939 to 1941, attending MSU during the summer months. In 1940, Dortha married James Newell Hosey of Springfield, MO. After the arrival of their firstborn in 1942, she accompanied her husband on a number of moves through his time in the service during WWII and his employment with the United States Weather Service.
She took pride in her role as a wife, mother and homemaker.
The Hoseys resided in several places, including: Springfield, Houston, Willard, and Mountain Grove in MO; Chicago, IL,; Jacksonville, FL, Chapel Hill NC; Oakland, CA; Cheyenne, WY; Gering, NE, Topeka, KS and Raleigh, NC. After each move, she became an active member of her community and church.
Dortha was preceded in death by her parents, her husband, her sister Juanita, her brother Newton and His son Newton, Jr., and her grandchildren, Chris and Katherine Metzler and Kaitlan Prugger. She is survived by her children: Sylvia Richardson, Rick Hosey and Lisa Hosey; grandchildren, Angela Gannon and Ariel Prugger and her great grandsons: Alex and Max Gannon. Dortha treasured her extended family, including all of her in-laws and step-grandchildren. Visitation will be held from 10:00 AM – 11:00 AM, Saturday, September 10, 2016 at Greenlawn Funeral home South 441 West Battlefield, Springfield, Mo 65807. Funeral Service to follow at 11:00 AM. Interment will be held at Brookline Cemetery in Brookline, Mo.