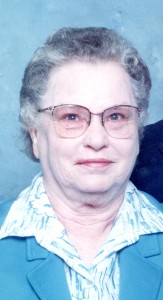 Shirley Eileen Davis, 76, died May 30th, 2015 at Springfield Rehab & Health Care, Springfield, MO. Born June 10, 1938 in Greenforest, AR to Robert and Bertha Hodgkinson. Shirley was a very devoted mother. Shirley was licensed threw the state of Kansas and Missouri for childcare because she loved caring for children. Shirley also delivered newspapers for 26 years in Kansas and Missouri, and she worked for Beaver Express for a while and her husband had their own business for a few years.
Shirley married Clinton L. Davis on May 25, 1956 in Pratt, Kansas. Clinton died March 7, 2015.
She is survived by her brothers, Robert G Hodgkinson of Hutchinson, KS, Delmar Hodgkinson and wife Alda of Pratt, KS, and Dennis Hodgkinson of Osawatomie, KS; her son, Ricky Davis of Nixa, MO; her daughter, Sheryl Davis of Nixa, MO; and her brother in-law, David Davis of Nevada, MO; as well as several nieces, nephews, great nieces, and great nephews.
Shirley is preceded in death by her parents; her mother in-law, Isabel; her father in-law, Don W. Davis; her step mother in-law, Joan E. Davis; and her sister in-law, Donna.
Celebration of life services at Greenlawn Funeral Home South, 441 W. Battlefield, Springfield, MO. 65807 at 1:30 p.m. Saturday, June 6th, 2015 with funeral services following at 2:30 p.m. with Reverend Jim Mason of Schweitzer United Methodist Church and Reverend Kathryn Elizabeth of Season’s Hospice presiding. Burial will be at Greenlawn Memorial Gardens.
Memorials may be made to Season’s Hospice or the Cancer Foundation, both in care of the Greenlawn Funeral Home South, 441 W. Battlefield, Springfield, MO 65807.
Flowers may be sent to the funeral home and cards to Sheryl Davis, P.O. Box 2222, Nixa, MO 65714.