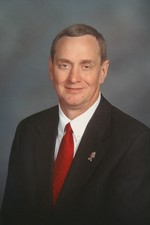 Stephen E. Smay, loving husband and father, went home to be with the Lord on July 30, 2009, in his home. Steve, a native Springfieldian and horticultural food scientist, was born January 29, 1948, to Alvin and Dorothy (Rutledge) Smay. On August 29, 1969, he was united in marriage to Nancy Barton, his high school sweetheart. Steve graduated from Hillcrest High School and then received a Bachelors of Science degree in Horticultural Food Science from the University of Arkansas, where he graduated number one in his class. He worked 40 years in the “food business” in Springfield as Quality Control Manager at French’s and as the Food Service Director for Springfield Public Schools and Bentonville, Ark. Public Schools/Aramark. Steve was a deacon and treasurer for High Street Baptist Church. He enjoyed coaching the Tenth Inning Kids baseball games, even when he was ill. He is survived by his wife, Nancy; two daughters, Sarah Daly and husband, Jesse, Kansas City, Mo., and Erin Smay, Springfield; a sister, Jeanne Smay, Omaha, Neb.; mother-in-law Mary Barton, Springfield; sisters-in-law and spouses, Liz and Chris Trussell, Roseville, Calif., and Jeanette and Chris Mohr, St. Charles, Mo.; two nephews, Tyler Trussell and Alex Mohr; an aunt, M.M. Thompson and husband, Richard; and cousins, David and Kathy Rutledge, Julie Ann and Jimmy Woodward, Jennifer Rutledge, and John and Laura Woodward. He was preceded in death by his parents; father-in-law James W. Barton; and an uncle, Gene Rutldege. A memorial service will be held at 1 p.m. Saturday, August 8, 2009, in High Street Baptist Church Auditorium, 900 N. Eastgate, in Springfield, with Pastor Eddie Lyons officiating. Donations may be made to the Springfield Public Schools Foundation Steve Smay Scholarship, the American Cancer Society, or High Street Baptist Church. Online condolences may be left at www.greenlawnfuneralhome.com.