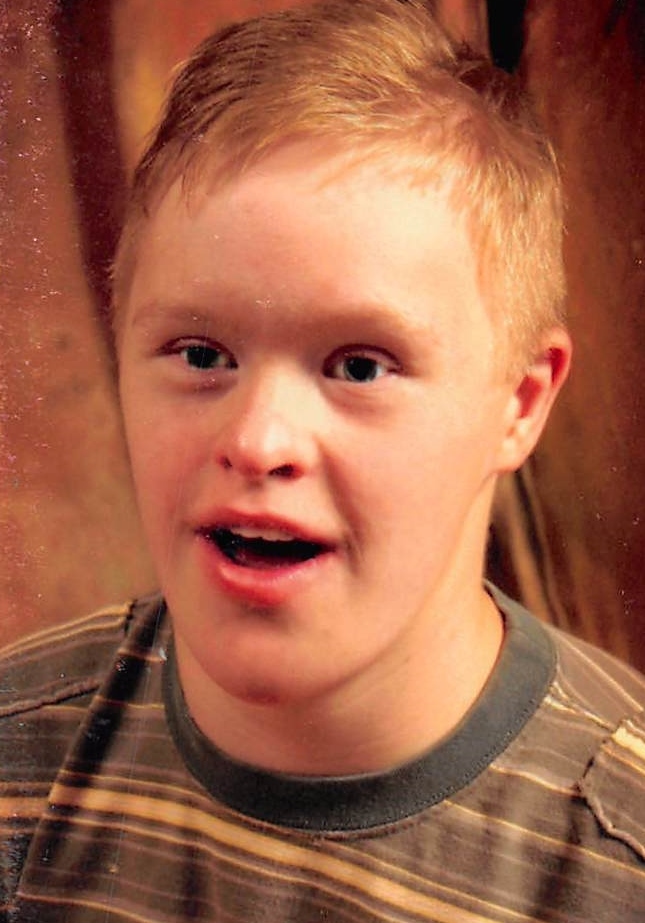 Stuart Mark Grimm, 29, went home to his Lord on Wednesday March 27, 2019. He passed away at Mercy Hospital in Springfield, MO, surrounded by three generations of his loving family.

Stuart was born on April 29, 1989 in Indianapolis, Indiana to Dr. Mark and Susan Grimm. A person with Down Syndrome, Stuart lived a happy life. In his almost 30 years, he touched the lives of so many people.

When he was four years old, Stuart moved with his family to Springfield, MO, where he has resided since.

He enjoyed spending time in the summers at Camp Barnabas, a camp for those with special needs, in Purdy, Missouri. His siblings accompanied him for many of those years. He participated in the Summer ARC Program until age 18 and then continued in the Saturday Recreation Program.

As an adult, Stuart's days were spent at Adult Tendercare in Springfield.

He visited his maternal grandparents in Palm Desert every year. He especially loved swimming in the pool during these visits.

When eating out with his family for special occasions, Stuart was known to enjoy his bowl of vanilla ice cream.

Mostly, Stuart was a homebody. He was happiest while swinging in his swing, relaxing by the fire, or playing with his favorite toys. A lot of this time was spent with his sister Meredith, who also played an important role in caring for Stuart.

While hospitalized in the last week of his life, Stuart was baptized into the Catholic Church and received the Sacrament of the Sick.

Stuart leaves behind many who loved him and will miss him greatly. He is survived by his parents Susan Grimm and Dr. Mark Grimm, both of Springfield, MO, his sister Meredith Grimm and brother Eric Grimm, also of Springfield, MO, his grandparents Bill and Linnie Russell of Palm Desert, CA and Phyllis Grimm of Evansville, Indiana. He is also survived by his uncles and aunts, Jon Russell of Mesa, AZ, Cathy Wagner of East Haddam, CT, Kirk and Jane Grimm of Hinsdale, IL, and Phyllis Grimm of the United Kingdom and two cousins.

Stuart is predeceased by his grandfather Dr. William Grimm.

The family respectfully requests that anyone wishing to honor Stuart may do so by making a donation to Adult Tendercare Center, 3729 N State Hwy H, Springfield, MO 65803. Note that your donation is in memory of Stuart Grimm.