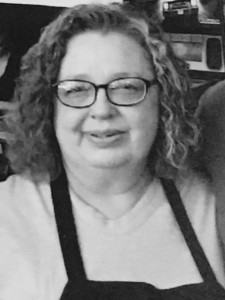 Susie (Garrett) Wolfe, age 57, of Springfield, MO, went to her heavenly home, where she would have no more pain, on Saturday, July 2, 2016 in her home. She was born September 27, 1958, in Springfield, MO, to Rusell and Louellen (Fanning) Garrett. She was a member of the Hamlin Baptist Church. She married Gerald Wolfe on May 7, 1986. Together they managed Merle’s Hotdog restaurant on Walnut street.
She was preceded in death by her parents and a niece Sara Garrett. She is survived by her husband Gerald, son Christopher R. Nowlin, his wife Emily, son: Jerimiah K. Wolfe, and his wife Sterling, and daughter; Jennifer M. Richardson, six grandchildren; Brock, Vilolet, Gabe, Ava, Hunter, and Micah her sister: Nancy E. Garrett, and three brothers; Wayne Garrett, Don L. Garrett, and Charles R. Garrett, and his wife Linda, her nephew Josh Garrett and family and niece Kristi Garrett, she is also survived by her uncles and cousins.
Funeral services will be held at 10:00 a.m., Thursday, July 7, 2016, at Greenlawn Funeral Home North, Springfield, MO. Burial will be held in Greenlawn Memorial Gardens, Springfield, MO. The family would like to thank all the medical personnel who had taken care of Susie for so many years. Services have been entrusted to Greenlawn Funeral Home North, Springfield, MO. Online condolences may be made at www.greenlawnfuneralhome.com.