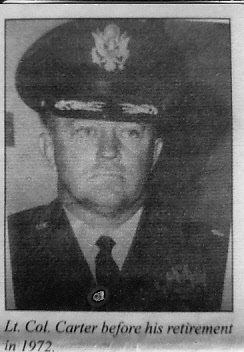 Swede Carter, age 93, passed away on Tuesday, August 6, 2019, at 5:45 PM in the Missouri Veterans' Home in Mount Vernon, Missouri. He was born on December 1,1925, in Mansfield, Missouri, the son of Garret W. and Blanche Carter. Swede graduated from Mansfield High School and Missouri State University in Springfield, Missouri.
On March 3, 1948, Swede Carter and Eleanor June Londagin were married. To this union three children were born: Jack, Gary, and Linda Sue.
Swede served 29 years in the United States Air Force and retired with the rank of Lieutenant Colonel. He was awarded two Bronze Star Medals and a Distinguished Flying Cross Medal.
Swede loved to play bridge and also enjoyed a good round of golf.
Swede was preceded in death by his parents, Garret W. and Blanch Carter; his wife, Eleanor, and his daughter, Linda Sue..
He is survived by his sons, Jack and wife Cynthia, and Gary and wife Debbie; seven grand-children; two great-grandchildren; extended family members; and many friends.
Services for Swede Carter will be on Friday, August 30, 2019 at Greenlawn Funeral Home North. The memorial service will be at 8:30 AM. Burial follow at 10:00 AM at Missouri Veterans Cemetery.