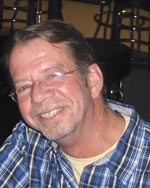 Terry D. Mitchell, 60, passed away suddenly on Sunday, November 22, 2009 at 4:15 p.m. He was surrounded by his loved ones on this beautiful sunny fall afternoon. He was born on November 7, 1949 in Licking, Missouri and attended Licking High School. He served his country as a naval officer and earned a Bachelor of Science degree from Drury College in 1975. Terry was a Master Mason of the Licking Lodge, and member of the Abou Ben Adhem Shrine Temple. He worked in the pharmaceutical industry for more than 25 years, but his true love was for vintage cars. Terry is survived by his mother, Mabel Mitchell; and sister, Jane and husband Bill Mckinney of Licking, Mo.; his children, Shanon Messenger and Jason Mitchell of Springfield, Mo.; his grand-daughter, Raegan Daniels; his daughter-in-law to be, Meagan Smith and son-in-law Robie Messenger. Terry was united in marriage to Janie Mitchell for 33 years. He has many wonderful friends who were an important part of his life, and close partner Karen Hoaglin. A celebration of Terry’s life will be held on Friday, November 27 at 10a.m. at Greenlawn East Funeral Home in Springfield. A graveside service will be held immediately following at the Licking Cemetery in Licking, Mo. In lieu of flowers, memorial donations may be made to the American Heart Association, 2446 E. Madrid Ave, Springfield, MO, 65804. “Dream as if you’ll live forever. Live as if you’ll die today.” James Dean