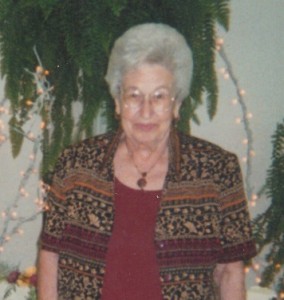 Thelma Florence Gilmore Kolassa age 95, Ash Grove, MO passed away peacefully on Nov. 17, 2014, in the Ash Grove Nursing Home. She was born on Aug. 22, 1919 in Ash Grove, MO to parents Bon and Bessie Gilmore. She was one of seven children. She married Arvel Corbin and they moved to Seattle, Wash. where they had one daughter Metta Hodges. She later married Ted Kolassa. She worked and retired from Boeing Aircraft in Seattle. She spent most of her adult life in Seattle.
Thelma is survived by her daughter Metta Hodges and her husband Ken, who reside in Florida. She has two grand-daughters: Tammy Skillas and Nicole Swain and her husband Byron Swain. She also has six great-grandchildren: Christopher Skillas, Justin Meaut, Noelle Swain, Narissa Swain, Niles Swain and Nikki Swain. Her indirect family includes: Esther Gilmore, Gene Gilmore and wife Carol, Annabell Keith and Hazel Nicholson. She traveled around the world and had a very good, long life. The family would like to thank the entire staff of Ash Grove Nursing Home for their good care. “I’ll miss you Mom”
The family invites friends and family for a visitation on Sunday, Nov. 23, 2014 from 2:00 to 4:00 p.m. in Greenlawn Funeral Home North, Springfield, MO