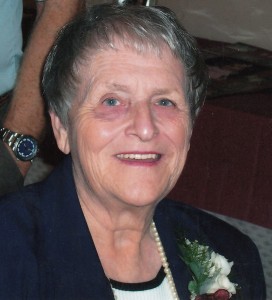 Thelma Lee passed away on January 31, 2015 at Mercy Villa in Springfield. She was born November 2, 1937, in Peel, AR., to Everette and Lora Yocham. She was preceded in death by her parents, husband, Harold D. Lee, two sons; Danny H. Lee and Raymond D. Lee, two brothers; Howard and Bob Yocham, and three sisters; Ivon King, Ruby Wallace, and Marie King. Thelma is survived by her daughter, Jan (Mark) Hawkins, daughter-in-law Rose Lee, grandchildren; Tiffany (Chris) Kirby, Shalimar (Michael) Evans, Anna (Sean) Robbins, Chris Hawkins, and six great-grandchildren. She is also survived by her sisters; Ruth Wilkinson of Yakima, WA, and Opal (Bob) Stafford of Moxee, WA., and brother, Billy (Sandy) Yocham of Yellville, AR., and a host of nieces and nephews. The family wishes to give a special thanks to Mercy Villa of Springfield for the special care they provided. Visitation will be Tuesday, February 3, 2014, from 6:00-8:00pm at Greenlawn Funeral Home North. Funeral service will be Wednesday, Feb. 4, 2014, 10:00am, at Greenlawn North Funeral Home. Burial will follow at Greenlawn Memorial Gardens.