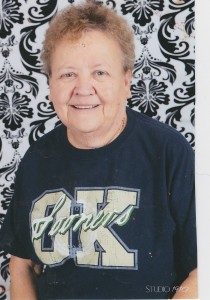 Thelma Kay Scarborough departed this life in her home surrounded by her children, after a 6 month battle with cancer, on November 21, 2014. She was born September 16, 1943 to Everette Andrew Johnson and Zula Arlene Holmes. She was 1 of 10 children.
She was married to Frank E Collins in 1959 and had 3 children, Frank E Collins, Jr, Ricky A Collins, and Alison Fay Haley. She was divorced from him in 1964.
In 1972, she was married to Everette B Scarborough, Jr and had 2 children, Everette B Scarborough and Kevin Scarborough. She has 5 grandchildren, Michael Werneke, Anthony Fisher, Emily Fisher, Franklin Haley and Mikayla Haley. She also has a great-grandson, Mason Werneke.
She is preceded in death by her husband, Everette Scarborough, her son Frank Collins, 4 brothers, Chester Johnson, William Johnson, George Raymer and Richard Randolph, 3 sisters, Agnas Johnson, Alice Morgan, and Louise Grider.
She is survived by 2 sisters, Hazel Hoover and Charlotte Mattison and numerous nieces and nephews.
She was employed at The Gardens Assisted Living facility as a Housekeeper for 16 years, where she retired in December 2013.
There will be no visitation. Graveside services will be Saturday December 6th, 2014 at 11:00 am at the GreenlawnNorthCemetery, 3506 N National Ave, Springfield, MO65803 and after there will be a Family gathering at the Teamsters Local 245, 1845 E Division, Springfield, MO65803.
Flowers, Food and Monetary donations may be sent to Alison Haley, 1633 E. Bennett St., Springfield, MO. 65804 between now and December 5, 2014.