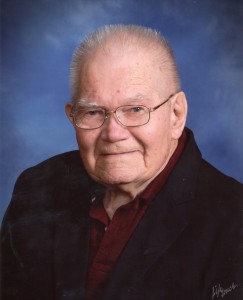 Theodore (Ted) Gregoroski was born on September 12, 1932 to Thomas and Josephine (Baran) Gregoroski near Elyria, Nebraska. He is the oldest of five children. The family moved to Springfield in 1941. Ted graduated from St. Agnes High School in 1950, then served two years in the Navy on the USS Chimon in support of the Korean War. He worked at Douglas Aircraft Co. in Tulsa, OK. Then as a Govt. Contractor with the Department of Defense, and retired from the Federal Medical Center and finally Mercy (St. Johns) Hospital. He married Mary Lou Ryan in 1954 and then Barbara Reeves (Boyer) in 1965, who both preceded him in death. He is survived by five children: Gaye Lynn Thorn (Wes), Ruthi Stayton, Bret Reeves (Robin), Teresa King (Joe), and Laura Lea Osborn (Mike) who looked after him the last few years. One brother Carl, three sisters, Alvina Tasset (Damian), Evelyn Anderson (Robert), Christine Bynum (James), and a sister in law Carolyn Hall of Leadwood MO. 13 grandchildren and 23 great – grandchildren. Ted was a long time member of the Knights of Columbus, active in St. Elizabeth Ann Seton Catholic Church, and chances are you have seen him playing at the Bingo Emporium, Wednesday, Friday, and Sunday nights. A prayer service will be held Sunday November 29, 2015 at 6:00 p.m. followed by a visitation in St. Elizabeth Ann Seton Catholic Church. Funeral Mass will be held Monday November 30, 2015 at 10:00 a.m. in St. Elizabeth Ann Seton Catholic Church with burial following at White Chapel Cemetery, Springfield, MO. Military Honors will be rendered. Memorial donations may be made to the Parkinson’s Association, Knights of Columbus, Catholic Schools, DAV, or a charity of your choice.