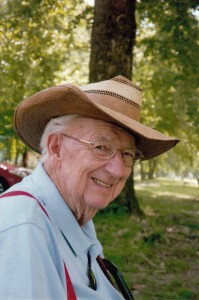 Thomas D. Peebles, Sr., age 84 of Springfield, died peacefully in his home on Wednesday, December 24, 2014, and entered into his eternal reward. Tom was a loving and devoted husband, father and grandfather. He is survived by the love of his life, his wife of 62 years, Delores. Tom was a wonderful father and is survived by three sons and their wives, Tom, Jr. (Jami), Mark (Kim) and David (Judy). He was a tender and affectionate Papa and is survived by eight grandchildren, Ashley Silva (Jordan), Luke (Nicole), Andy, Chelsea, Johnny, Alex, Daniel and Emily Peebles. Tom also leaves behind numerous other family members and friends. He was preceded in death by his parents, Dick and Clara Peebles, one sister, Dorothy Morlan and two brothers, Edward Peebles and Richard Peebles. Tom was a devout Christian and was a member of Central Assembly of God, where he enjoyed serving as an usher. He was a U.S. Navy Veteran, having served aboard the U.S.S. Cabildo L.S.D. 16 for four years during the Korean Conflict. Tom retired from the U.S. Postal Service in 1986 after serving 31 years in the Springfield office. He began as a postal clerk and retired as a member of management. Tom was an avid fisherman, often sharing his bounty with family and friends. He liked nothing better than helping young fisherman, whether it meant sharing a favorite bait or lure, or just giving tips for a good catch. After retirement, and in addition to his fishing, Tom began volunteer work with the Springfield Police Department, first serving as part of the Handicapped Enforcement Action Team (HEAT) and then working in the Grant Beach substation almost daily for 15 years. Tom’s service and dedication to the Springfield Police Department was recognized in June 2008 by a Certificate of Commendation presented to him by Chief Lynn Rowe. Visitation will be held on Sunday, December 28, 2014 from 4 to 6 pm at Greenlawn North. Memorial services will be held at Central Assembly of God, 1301 N. Boonville, on Monday, December 29, 2014, at 11 am, with Dr. Charles Harris and Sam Hamilton officiating. Burial with military honors will follow at the Missouri Veterans Cemetery at 1 pm, with Rev. Don Tucker officiating. In lieu of flowers, contributions may be made in Tom’s memory to the Central Assembly of God Food Pantry