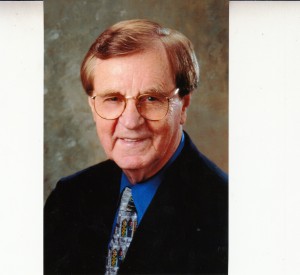 Rev. Thomas E. Pace, 82, went to be with the Lord on Friday, December 18, 2015 in Strafford, Missouri. He was born on April 19, 1933 in Sugar Creek, Missouri to Charles and Emma Pace. After completing high school, Thomas (known as Tom) attended Central Bible Institute in Springfield, Missouri (now a part of Evangel University). In 1953, he married Bette J. Berthume of Owosso, Michigan, whom he met at CBI. Tom and Bette had four children and ministered at various churches throughout Michigan, especially in Kalamazoo at First Assembly of God and Grace Fellowship Church. Tom’s ministry lasted 57 years, retiring in 2010 to Maranatha Village in Springfield, Missouri. Tom was known for growing churches during his career. He was also host and minister on the television program “Life Anew” shown on cable in Kalamazoo and Portage, Michigan. Thomas Pace is survived by four children, Cindy Rodgers, Gordon Pace, Cameron Pace, and Lorna Holler; seven grandchildren, Jennifer, Suzanne, Stephanie, Alizabeth, Grant, Andrea, and Austin; and four great-grandchildren, Paisley, Owen, Amelia, and Brooklyn. A time of visitation will be held at Greenlawn Funeral Home on North National on Monday, December 21 from 6 to 8 PM for those in the Springfield, Missouri area. For those in Michigan, visitation will occur on Monday December 28 at 11:00 am in Langeland Westside Funeral Home. A funeral service will start at 1:00 pm. With to follow at Mt. Ever-Rest Cemetery. Memorial donations may be made in lieu of flowers to the Thomas and Bette Pace Scholarship Fund at Evangel University. Visit http://giving.evangel.edu/give/ to make a donation. Please use the “other” link and indicate this scholarship for the designated gift.