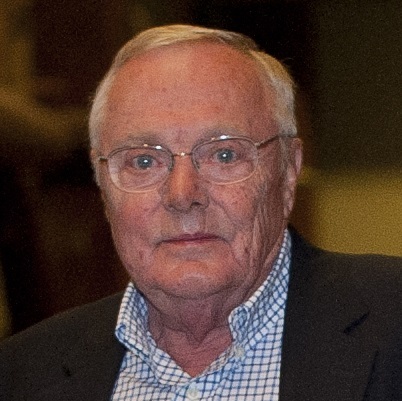 Thomas Lewis Hancock passed away December 27, 2019. Tom was born on January 24, 1945 in Springfield, Missouri to John and Lena Hancock. Tom was kind and generous; a great son, brother, husband, father, grandfather, employer, and friend.
He graduated from Hillcrest High School in 1963. Tom married Rosemary in 1965. From the time of his teenage years, Tom worked in the grocery store industry. In 1976, Tom and Rosemary purchased the longtime neighborhood store Bair’s Grocery. He enjoyed and loved working 40 years there. He led with a strong work ethic and cared deeply for his employees. His children Thomas and Laura, oldest granddaughter Amanda, and niece Hattie all worked at the store. Many customers who passed through Bair’s became longtime friends.
Despite staying busy running the store, Tom found time for his family. He was actively involved in all five of his grandchildren’s lives. From cheerleading competitions and basketball games to violin recitals, soccer games and everything in between, he made sure to attend as many events of theirs as possible.
Tom was a member of Campbell United Methodist Church, Ozark Empire Grocer’s Association, Heart of the Ozarks Sertoma Club, and the National Wild Turkey Federation. He was an avid hunter and fisherman and enjoyed outdoor pursuits with family and friends.
Tom was preceded in death by his parents and his sister Dianna Strother. He is survived by his beloved wife, Rosemary; daughter, Laura (George) Postma; son, Thomas (Thesha) Hancock; grandchildren, Amanda, Jeremiah, Isabella, Eli, and Zane; brothers, Jimmy (Janice) and Donnie (Diane); sisters Nora (Steve) and Marilyn (James).
Visitation services will be at 1:00 PM Friday, January 3, 2020 at Greenlawn Funeral Home North. Funeral services will follow at 2:00 PM at the funeral home. Burial will follow at Greenlawn Cemetery.
In lieu of flowers memorial donations can be made in Tom’s name to Campbell United Methodist Church or Hamlin Baptist Church and may be left at the funeral home.