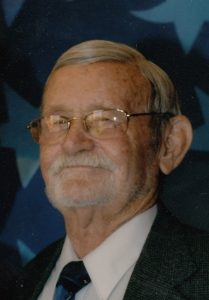 Thomas O. Sutterfield, age 85, of Springfield Mo went to be with the Lord on September 16, 2016. Thomas was born in Big Flat, Arkansas, Sept. 19, 1930 to Obie and Bessie Sutterfield. He was preceded in death by his parents, Brother Joel, sister’s Naova Stoffel, Nadine Wilson, and infant sister.
He is survived by his wife of 61 years, Doreen Holmen Sutterfield, Brother’s Tollie & Sue Sutterfield, Talmai & Debbie Sutterfield, and sister Nathalie Schmidli, two daughters, Debra & Wayne Pilkinton, Karen & Ed Sims, grandsons, Brian & Sarah Sims, Eric & Mandi Pilkinton, and granddaughter Aimee Sims and six great-grandchildren.
Thomas served in the US Army for 21 years, he fought in the Korean War and he was highly decorated. Upon his retirement from the Army as SFC First Class E-7, he attended Central Bible College and was ordained as an Assemblies of God Minister in 1976.
Thomas served as a Pastor and Evangelist in MO and AR. He was a member of North Side Assembly of God, Springfield, MO. In his later years, he served as a beloved Sunday school teacher and helper in many areas.
Visitation will be held on Tuesday, Sept. 20, at Greenlawn North from 6-8 p.m. Celebration Services will be held at North Side Assembly of God , Wednesday, Sept. 21, at 1:00 p.m. followed by Committal at the Springfield Missouri Veterans Cemetery.
In lieu of flowers, donations can be made to House of Hope Ministries, North Side Assembly of God.