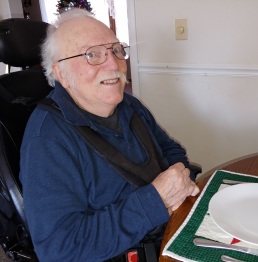 Tonny Bill Wolfe was born to Bill and Luann Wolfe in Springfield, Missouri on August 15, 1946. Tonny graduated from Central High School in 1964. Then after living for 30+ years in 10 different towns and 11 states for school, military, and work related reasons, he moved back to Springfield to be near family. He went to be with Jesus on February 8, 2020 at home in Springfield, Missouri following a long illness (22 ½ years as a quadriplegic and more recently, a battle with coronary disease and pneumonia.)

Tonny said that he gave his heart to Jesus at age 5, and gave his life to Jesus in his freshman year of high school. He was a strong Christian throughout his entire life. He said, “I married Marilyn, and she kept me on the straight and narrow from then on.”  He was active in every church they were in; including serving as Sunday School Teacher and Sunday School Superintendent. He was a member at Central Assembly of God in Springfield, Missouri for 20+ years.

He was preceded in death by his parents, Bill and Luann Wolfe and his sister Patsy Hake. He is survived by his wife of 51 years, Marilyn Wolfe; three sons and their wives, Tim and Shellie Wolfe, Erin and Gwen Wolfe, Brian and Tiffany Wolfe; and 4 grandchildren, Zion Wolfe, Asher Wolfe, Selah Wolfe, and Caspian Wolfe; as well as a host of loved ones, extended family, and friends.

He married Marilyn, the love of his life, in 1969 and was father of three sons: Timothy, Erin, and Brian. He dearly loved his family. He loved going to ball games or concerts or plays – whatever the boys were doing. He loved taking the family often to the attractions of the area they currently lived – fun times together – hiking, parks, Mayflower 2, museums, beach, mountains, amusement parks, bookstores, picnics, historical places, national or state parks, and biking trails. He was an avid reader and book collector. He also loved to travel and he loved learning. He recently took an astronomy class several years in a row just because it was so fascinating to him.

He graduated from Central Missouri State with a Mechanical Design Engineering degree in 1973. He loved his work. He worked at various companies over the years as a Senior Design Engineer, designing various projects such as printing presses, hand held computer scanners (such as in grocery stores), personal TVs in airplane seats, various plastics design, as well as redesigning a fork lift tractor. He received one United States Patent. He was partner for a Design Engineering Consulting Company for a year before he became a quad.

At age 51 he became a quadriplegic due to an allergic reaction to medication. His life changed literally overnight. This began 22 ½ years of challenges, physical struggles, and adjustments. Yet through it all, Tonny kept his faith in Jesus, and daily relied on Him for his breath and strength. He chose to be grateful for what he had rather than focus on what was gone. He had a good sense of humor – making comments seemingly coming out of nowhere – making people laugh at the truth of it. He loved people, was liked by everyone, and knew just about everyone’s name. He was a blessing and encouragement everywhere he went.

Beginning about 2000, he had the opportunity to work on The World Missions Touch Screen Project from home as his strength allowed. He had always loved missions, and this was a way that he could be a support for missions. He loved doing this too. He wrote the programming for it. It became the basis for AG Missions online years later. After that project closed, he began designing and servicing websites for Missionaries and Ministries. He did that until two years ago when his health began to decline.

He had finished God’s plan for his life. He was ready and wanting to go to be with Jesus.
Well done, good and faithful servant. You loved and you are loved.