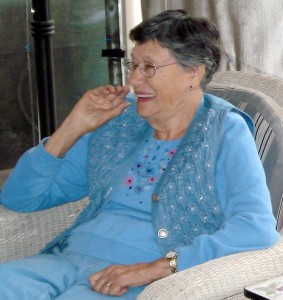 True Edith Myers, age 94, of Willard, MO, passed away Wednesday, August 26, 2015 at Maranatha Village, Springfield. She was born May 6, 1921, near Reeds Spring, MO, to George and Lou Ethel (Rutledge) Friend. She was married to Spencer Myers (deceased) May 11, 1939. She had five sons: Jim and wife Emma, of Willard; Michael (deceased); Jerry, of Springfield; Dwayne and wife Cindy, of Battlefield; and Jeff (deceased). She had nine grandchildren: Jenny, Doug, Joel, Jody, Christina, Jason, Jeremy, Lauren, and Michael. And she had six great-grandchildren.
She was a member of the First Baptist Church of Willard, and she and Spencer were instrumental in starting the First Baptist Church of Battlefield.
She enjoyed traveling with Spencer and they were members of the Airstream Caravan Club for many years, and traveled to most of the states in the U.S., as well as to Canada and Mexico. When not traveling they lived on Table Rock Lake, and later on Stockton Lake. She enjoyed oil painting, gardening, cooking, and visiting with friends and family.
Funeral services will be held at Greenlawn Funeral Home North at 1 pm Tuesday September 1st, with visitation preceding at noon. Burial will be held in Good Spring Cemetery near Conway. Services have been entrusted to Greenlawn Funeral Home North, Springfield, MO. Online condolences may be made at www.greenlawnfuneralhome.com.