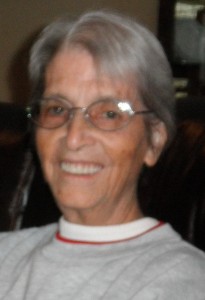 Verdene Shirley Reed, daughter of Orean and Dora Bass, was born on July 29, 1930, near Norwood MO. She went home to be with the Lord September 1, 2015 in Woodland Manor Care Facility, in Springfield MO at the age of 85.
She was proceeded in death by her parents; her husband, Ben Reed; two brothers, Kermeth and Bud Bass; and two grandsons, Bruce and Eric Schmachtenberger.
She is survived by 2 daughters; Shirley Schmachtenberger of Springfield, Sue White and her husband Bill of Strafford; one son, Bennie Schmachtenberger and his wife Debbie of Fair Grove; 3 grandchildren, Jessica McCulley and her husband Larin of Springfield, Lindsay Pearson of Louisville, KY, Nathan Schmachtenberger and his wife Rachelle of Shawnee, KS; and 1 great- grandson, Ian Schmachtenberger of Shawnee KS.
She was born near Norwood, Mo and moved to the Ashley community as a young child. She attended Spence School for grades 1 through 8 and later graduated from Mansfield High School in 1949. She married Ernie Schmachtenberger on June 26, 1949 and later married Ben Reed on Aug 6, 1983. Along with being a devoted homemaker caring for her family, she worked various jobs outside the home as a nurse’s aide and store clerk. Later in life she enjoyed providing companionship and assistance to older individuals.
Verdene made a profession of faith in Jesus Christ at an early age. She was a member of Grant Avenue Freewill Baptist Church in Springfield. Her church has always been an important part of her life and she has many special friends that she attended church with.
In her spare time Verdene enjoyed reading. Her favorite stories were about the Amish. In earlier years she also enjoyed cooking special treats for her family and friends.
Verdene was a loving mother, grandmother, and great-grandmother. She was a friend that you could count on. We celebrate her life and love and will cherish the wonderful memories she created for her family and friends.

Funeral services will be at 10:00 a.m. Friday, September 4, 2015 at Greenlawn Funeral Home East in Springfield, MO with Pastor Keith Garrison officiating. Burial will be at Ashley Cemetery in Mansfield, Missouri. Visitation will be from 6:00 p.m. until 8:00 p.m. Thursday, September 03, 2015 at the funeral home.
In lieu of flowers the family contributions may be made to Grant Avenue Freewill Baptist Church or St Jude.