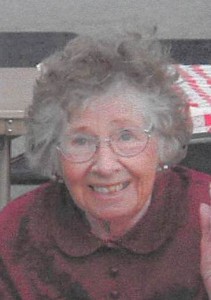 Verna Haworth fell asleep in death Tuesday, Oct 6 at the age of 89. She was the beloved wife of George Haworth and loving mother of 4 daughters, Mary Haworth, Fargo, ND, Margaret (Richard) Chiapparelli, Stockton Ca, Jane (Dale) Schoen, Branson, Mo. and Betty (Clarence) Wilson, Eldorado, Mo. She had 3 grandchildren, Marie Chiapparelli and Carmen and Russell Schoen, also 2 great grandchildren, Mason Schoen and lily McKinney.
Verna Haworth was born January 18, 1926 in Montevideo, MN to Andres and Marit Anderson. Verna had a twin sister, Vera and 3 brothers, Andrew, Arnold, and Richard. They preceded her in death. She graduated High School in Alberta, MN before continuing her education at business college. Verna moved to Moorhead, MN where she worked as a telephone operator. Verna married George Haworth July 28, 1948. Shortly thereafter they moved near Grandin, ND where they farmed more than 40 years.
Upon retiring, they moved to West Fargo, ND.
Verna was baptized as one of Jehovah’s Witnesses in 1955, and with her husband and daughters, was very active in the local congregation of Jehovah’s Witnesses. After George’s death in 1994, Verna remained in West Fargo until 2007 when she moved to Missouri to be close to daughters Jane and Betty. Her greatest love was attending meetings at the Kingdom Hall and sharing what she learned with others. Verna was very loved and will be greatly missed by many.
There will be a memorial service at the Kingdom Hall of Jehovah’s Witnesses at 3430 S Freemont Ave in Springfield, Mo on Saturday, Oct 17 at 5 PM.