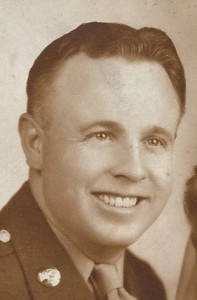 Vernal Porter, 96, passed away Sunday, May 24, 2015, at the Missouri Veterans Home in Mt. Vernon, Mo. He was born September 18, 1918, in Escalante Utah to Ellis and Eliza Porter. As a youth, Vern worked in C.C.C. Camps in Bryce and Zion Canyons. He attended Brigham Young University. In 1943, he married Norma Jean Price, whom he met while stationed at O’Reilly Army Hospital in Springfield, Mo. Vern was a veteran of the U.S. Army having served as a Technical Sergeant during World War II and the Korean War. He was a Springfield Firefighter for several years and retired from Paul Mueller Co. Vern was also a” gentleman farmer” and spent many happy hours tending to his cattle and garden. He was a member of Pleasant Home Baptist Church. Vern was preceded in death by his parents, wife Norma, four sisters and seven brothers. He is survived by his daughter Joyce K. Wright and her husband Joe, one granddaughter, one grandson, one step granddaughter, one step grandson, two great grandchildren and 3 step great grandchildren. Also surviving are one brother, Neal Porter, Payson Utah, one sister, Donita Pay, Salt Lake City, Utah, special niece, Denice Youd, Orem, Utah and many other relatives.

A graveside service will be held at Belleview Cemetery, 5105 Farm Road 169, Saturday, May 30th at 11:00 AM with Reverend Andy Bryan officiating. Military Honors will follow.

In lieu of flowers, donations can be made to the Missouri Veterans Home, 1600 S. Hickory, Mt. Vernon, Missouri, 65712. The family would like to thank the staff of C Wing at the Veterans Home and caregivers with Hospice Compassis for their loving care.