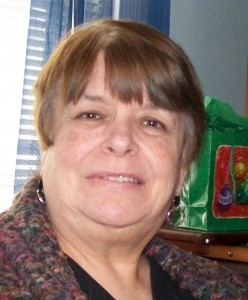 Vicki Anne McHenry (Anderson) went to be with her Lord on Sept. 7, 2015 after battling a long illness.
Vicki was born Feb. 2, 1949 to Raymond and Frances Anderson. In 1970, she married Greg McHenry, her high school sweetheart on Dec. 10.
She was preceded in death by her father Raymond, and brother, Doug.
She is survived by her husband, Greg; daughter, Melissa Booth (James); grandchildren, Kalen, Baylee, and Madison; her mother, Frances Anderson; sister, Patricia; brother in law, Rick and “the girls”, along with numerous nieces, nephews, and cousins.
Vicki played flute in high school marching band for Glendale until she graduated. She was a rainbow girl in her teenage years, a former member of TOPS #MO1098 in Springfield, MO. She was recently retired from Bass Pro Shops as a product information specialists after 28 years.
She found joy in organizing family events such as Christmas, birthday parties, and especially major week-long family reunion camp outs.
Vicki’s main focus was her family and her grandchildren were her pride and joy. Her smile and love will be sorely missed She never met a stranger. Her life created many ripples in the lives of those she cared about. Vicki was a member of Brookline Baptist Church and her love for the Lord was never ending. We will miss her dearly.
A visitation will be held Wednesday, September 9, 2015 from 6-8:00 p.m. in Greenlawn Funeral Home South, Springfield, MO. Funeral services will be held Thursday, September 10, 2015 at 1:30 p.m. at the funeral home with interment to follow at the Missouri Veterans Cemetery, Springfield, MO.