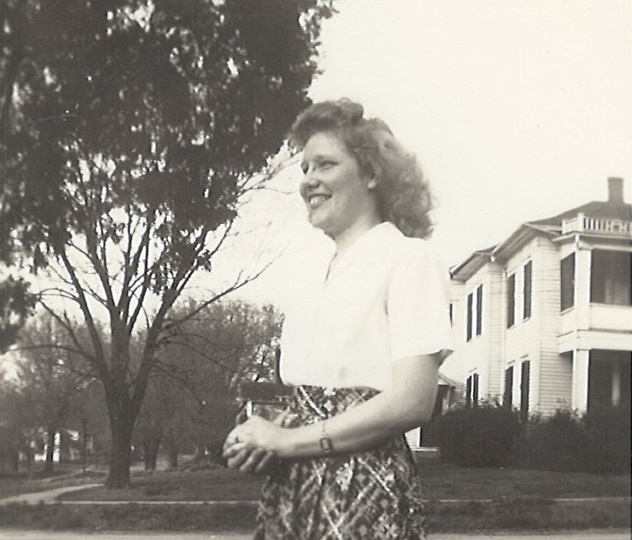 Viola Anna Smart (age 96), a resident of Springfield MO for the last forty years, passed away gently and peacefully at her home early Saturday morning, April 20, 2019. Her three children, her grandchildren, great grandchildren, and her extended family survive her. She was preceded in death by her husband Charles (married 70 years) and by her brother and other relatives.

Viola was born in the vast expanse of the Kansas prairie in Meade County. She had several relatives in that general area at the time also. The house where she began her life stood by itself, with nothing else that the eye could see surrounding it. Here she lived with her parents (Edward and Ella) and her older brother (Francis). They endured through winter blizzards and summer droughts and experienced the years of the unrelenting wrath of the famous Kansas Dust Bowl – sand and dirt drifting to cover fences, the sun darkened, visibility virtually zero – literally pitch black – and the sand requiring to be shoveled out of the house when each storm would finally abate. The home they lived in was built by her father and she said all the furniture in the house was made by him also. Her brother was mostly her only playmate, and since they had no toys, they made them together for themselves.

Here are some other interesting features of her early pioneer-like life – no electricity, no indoor plumbing, the nearest town 20 miles away, rare trips to town, a lot of canning of fresh vegetables (that they grew) and fresh fruits, a lot of canning of all kinds of food items, making their own butter, cheese, sausage, and bread, using the water tank in the windmill for cool storage of perishables, tending the animals, creating clothing and bedding out of the 50 lb. cloth flour sacks (she and her Mom always tried to get pretty patterns when they bought the flour), walking 4 miles to a one-room school house and sometimes riding the horse to school, and then the chores to do at home after school. Her first language was German, so when she started school, she had to learn English.
Eventually the drought and the dust drove them out of Kansas to Colorado and then to Missouri where they lived in Cole Camp and then settled in a beautiful home in Windsor.
In high school in Cole Camp she was on the girls’ volleyball team which quite often made it to the championship finals, and quite often their opponent was the Versailles team. Volleyball was so much fun for her. She admitted that she wasn’t very fond of school, but she also really enjoyed the glee club she sang in while in high school there. Even though school was not a favorite thing of hers, she did well and was selected to go to Kansas City for additional special training in business skills. As it turned out her mother became seriously ill and Viola had to (and wanted to) go home and take care of her mother and the household. She met Charles Ralland Smart in Windsor. He was her first boyfriend, her first date, and her one and only husband (70 years). In their life together, they raised their family and provided well for them. And together they had a very different experience from the days of their youth. Now they were no longer on the farm, and they were progressing toward a life with all the modern conveniences and an easement of their financial situations. This was a span of almost 100 years during an unprecedented time of change in the USA and all over the world – all the way from no electricity to, well, what it is now!
Viola, very quietly, had an amazing life. And even though it would never be widely acknowledged in a public setting, she participated in many richly textured experiences in her 96 years and was appreciated by the people in relationship with her. She was a lovely person with a sweet disposition, and a beautiful smile. Everyone always had something nice to say about Viola. She loved her children and was dedicated to her family – literally heroic in her role as a mother!
As a mother and a wife she brought all her considerable wealth of homemaking skills she had learned from her parents to her own family, and she put her family first, and was simply and undeniably always there to see that they had what they needed. There is no doubt that she was the glue that kept it all together by persevering and by always doing what was needed in the little everyday things that we tended to take for granted at the time. Mother steadfastly supported everyone behind the scenes. The house was always neat and tidy, the meals were always on the table, and the clothes were always clean and ironed, and she made most of the clothing for her 3 children until they reached high school age. She always took loving care of us when we were sick. She was the protective rock that the everyday waves of life crashed upon.

Viola had a wellspring of artistic ability which showed itself in the beautiful clothes she made for herself and her family, the many items she crocheted, the scene she painted on the picture window at Christmastime, and finally the beautiful plastic canvas doll house, complete with furnishings, which she created for her two granddaughters.
She loved to watch the birds and squirrels from her kitchen window, and animals were always drawn to her because of her gentleness. She also appreciated the beauty of the plants and flowers and got great pleasure from her flower garden.
The only “modern” household convenience they had on the farm in Kansas was a telephone. She never became computerized and certainly not digitalized, and so she was amazed and delighted in the last week of her life to have a “face time” conversation with one of her relatives.
So we say good-bye to Mom, as Grandma, Great Grandma, and friend. Good job! Way to go! Happy trails! We love you, Mom!

Online condolences may be made at greenlawnfuneralhome.com