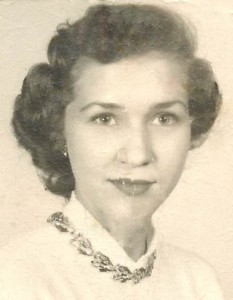 Violet May McKee West, 80, of Pensacola, Florida, passed away on February 19, 2016. She was born on June 17, 1935 in Winifred, KS to Robert J. & Elnora M. McKee. She spent most of her early years in Springfield, where she attended Springfield Sr. High in the class of 1952. She was in the Pep Squad and was FFA Sweetheart.
Vi spent years moving, due to marrying into the military, but ultimately settled in Pensacola, Florida, where she owned Wesley Supply.
She will be remembered as a warm individual who excelled at many things, including cooking, art and dance.
Vi is survived by her two sons, Bob (Liz) West and Mark West, Pensacola,FL.; 3 grandchildren, Michael West, Natalie West and Savannah West; 2 sisters, Irene Seiler, Clinton, MO. and Beverly Woodall, Springfield, MO.; 1 brother, F. Marion McKee, Mesa, AZ and numerous nieces and nephews. She is preceded in death by her Mother, Father and sister, Sharon Tribble.
She will be interred at Greenlawn Funeral Home in Springfield. Private Services.