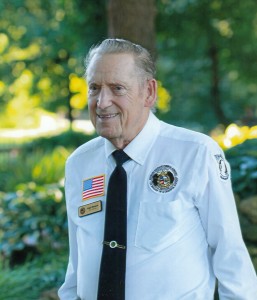 Virgil Jerome Gleason went to his Heavenly home on Sunday, September 20, 2015. He was born to James L. and Ruth Helen Gleason on August 4, 1937 on the kitchen table at his home near Eskridge, Kansas.
He had a lot of special memories from his life that he enjoyed sharing with others and here are some of the stories from the obituary he wrote himself:
“At age 7, my brother and I rode a horse about four miles to school every day. We moved to a different farm when I was 8, and we rode a bus 10 miles to school. I liked driving tractors and got my full time drivers license at age 14.
I liked physical work and washed dishes at a restaurant almost 50 hours a week while in high school, then carried brick on construction about four months before I joined the Army. I did my basic training at Ft. Leonard Wood, Missouri, then to Virginia for Seaman’s school, then stationed at Monterey, California on patrol boats before going to Rochefurt, France where I trained for war in a 24 hour Alert Company. At one point, I spent 5 days on a ship through a hurricane in the middle of the Atlantic.”
Here are more recent memories about his life he wants us to remember:
“I volunteered for 3 years with the Webster County Honor Guards. For the past 4 years, I have volunteered as an instructor for an Arthritis Exercise class at True Fitness in Marshfield, Missouri, and recently started a similar class at the YMCA in Seymour, Missouri. I enjoyed helping other people stay active to prevent suffering so much pain from Arthritis.
In January of this year, I was nominated Hometown Hero on Channel 10 and it was televised.”
Visitation will be Thursday, September 24, 2015, noon-1:00pm, at Greenlawn East Funeral Home. Funeral service will begin at 1:00pm. Interment will follow at 3:00pm in Missouri Veterans Cemetery with full military honors.