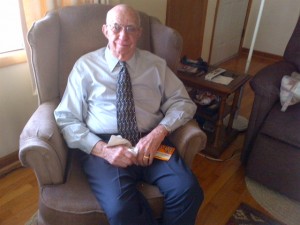 Warren Edward Harshfield of Springfield, Missouri died on December 10, 2014 at 7:15 pm from complications of Alzheimer’s. He was born in Parsons, Kansas on October 11, 1927 to Lorne and Thelma Harshfield. He served in the US Navy for 3 years, worked in the Post Office in Wichita, Kansas for 30 years, retiring in 1987. He was a Shriner, a member of the American Legion, and a member of National Heights Baptist Church
He is survived by his wife Carolyn of the home, daughters and spouses: Debra and Gary Farris of Rose Hill, Kansas, Kristen and Stuart Weniger of August, Kansas, grandchildren: Tina Bland, Stephen Bohon, Ashleigh Johnson, Kelli Kaysar,; great-grandchildren; Tyler Bohon, Aston Bohon, Zachary Bland, Phillip Rickerson, Declan and Ryleigh Johnson, step-sons: Alan, Paul, and Mark Murray, step-grandsons: Mathew Oliver and Glenn Murray, step-grandchildren Alex, Brooklyn, Lily and Amelia Murray.
Warren was preceded in death by his parents and his brother Kenneth Harshfield and sister, Marrion Dick
Visitation will be on Monday, December 15, 2014 from 10 AM until 11 AM at Greenlawn Funeral Home North Chapel, service to follow at 11 AM.
Burial will take place at 2 PM at Missouri Veteran Cemetery on Monday.