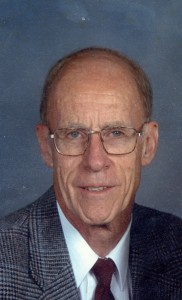 Wendell D. Morgan, 83, passed away Saturday, June 6, 2015 in Nixa Nursing and Rehab in Nixa, MO. Born August 15, 1931 in North Chicago, IL, Wendell was the son of Don L. and Grace Crenshaw Morgan. He attended grade school in Waukegan, IL and completed high school in Mt. Vernon, IL. He graduated from Southern Illinois University in 1954 with majors in math and physics.
Wendell served in the US Army from 1954 to 1956 as a surveyor in Okinawa, Thailand, and Japan. Following his discharge, he worked as a flight test engineer with McDonnell Aircraft in St. Louis, MO. In Marion, IL, he worked for Norge-Fedders, Sangamo Electric, and Olin-Mathieson. He closed out his career in Jacksonville, AL, at Bostrom Seating. He worked with aircraft design, home appliances, bakery equipment, anti-aircraft munitions and commercial truck seating. He was awarded five patents.
Wendell’s church, family and citizenship were all priorities to which he devoted countless hours. He served as a Deacon in several churches with a servant’s heart, a quiet, selfless, giving man who loved fixing things for others. Wendell was a member of South Gate Baptist Church in Springfield, MO.
Wendell married Shirley Jenkins on June 16, 1957 in McLeansboro, IL. He is survived by his wife of nearly 58 years, three children: Keith Morgan, Nixa; Alan (Lori) Morgan, Springfield; Rita (Kevin) Branson, Columbus, OH; eight granddaughters: Molly (Matt) McEwen, Memphis, TN; Melanie and Faith Morgan, Springfield; Renee, Casey, Bethany, Erin, and Kate Branson, Columbus, OH. Also surviving is a sister, Betty (Darrell) Molen, Brighton, IL; and three nieces: Candy (Rich) Stuckey, Bunker Hill, IL; Jan (Brent) Kessinger, Brighton, IL; and Darla (Chad) Bennett, Monett, MO.
Services will be at Greenlawn Funeral Home South, Springfield, MO, with a visitation Wednesday, June 10, 2015 from 6-8 p.m., and funeral services at 1 p.m. Thursday, June 11, 2015 with Dr. Chad Bennett officiating. Burial will be in a family plot at Wolf Creek Cemetery near Marion, IL.
The family would like to express our heartfelt appreciation for the wonderful caregivers at Bradford Court in Nixa, MO.