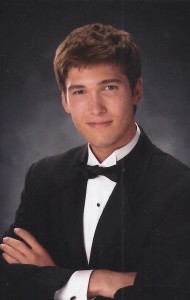 Wesley Aaron Dowler passed into Heaven on January 23, 2015 with his family around him. He is in the Arms of Jesus. Wesley was ~ Wesley is.
Wesley was born in Little Rock, Arkansas on April 6, 1990 to Terry and Bronwyn Dowler.
Wesley is survived by his parents, a brother Seth, and sisters, Stephanie and Sarah Dowler; grandparents Bill and Maribel Nelson of Springfield, Missouri, his MaMa Loretta Dowler of Paragoula, Arkansas and his girlfriend Chunling Cao.
He was preceded in death by his PaPa Wayne Dowler of Paragoula, Arkansas.
Wesley was a graduate of Kickapoo High School, Missouri State University and was studying for Doctorate of Chemistry at the University of Utah in Salt Lake City.
Wesley traveled the world. He went on several mission trips to various places doing different works. He was a member of Second Baptist Church. He enjoyed skiing, hiking, caving and exploring the world through travel.
Wesley was always a kind, generous and caring person. He never thought of himself better than anyone else and truly believed in helping others. He will be greatly missed by all who knew him.
Services for Wesley will be at 11:00 A.M. Monday, January 26, 2015 at Greenlawn Funeral Home East with interment in Greenlawn Memorial Gardens. Visitation will be fro 2:00 to 4:00 P.M. Sunday, January 25, 2015 in the funeral home.