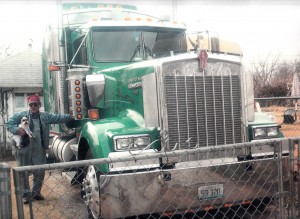 Wilbert Lee (Webb) Smith, 76 of Springfield, Mo passed away August 21, 2015. He was born September 16, 1938 in Chesapeake, MO to Harmon and Ruth (Gardner) Smith. He was preceded in death by his wife Deanna. Webb was a skilled heavy equipment operator and a lifetime member of OOIDA (Owner-Operator Independent Drivers Association) He and his wife spent many happy years driving big rigs throughout the United States.
He is survived by one son , Walter (Ana) Smith of Madison Heights, MI; three daughters, Robin (Nate) Hicks of Detroit, MI, Teresa Smith-Pena of Plymouth, MA, and Peggy (Randy) Lea of Springfield; one sister, Meredith Johnson of Redmond, OR; seven grandchildren; twelve great-grandchildren; and a host of extended family and close friends.
Graveside services will be at 1:00 p.m., Saturday, August 29, 2015 at Campground Cemetery, Chesapeake, MO. Visitation will be from 11a.m. – 12 p.m., Saturday, August 29, 2015 at Greenlawn Funeral Home North.