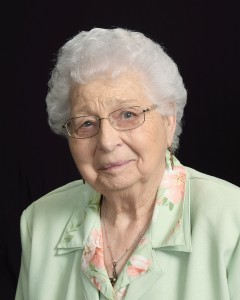 Willa Fay Neill was born June 23, 1922 and passed away November 16, 2014 at the age of 92 years. She was the daughter of William N. and Anna E. (Roper) Goss of Buffalo, Missouri. The family relocated to Springfield, Missouri when she was a young girl where she spent her formative years.
Willa graduated from high school and eventually married the love of her life, Ernest H. Neill. They lived a short time in Raytown, Missouri, then moved to the Overland Park, Kansas area until retirement drew them to the Buffalo, Missouri area once again. After a brief time in Buffalo, Ernie and Willa moved to Springfield, Missouri and lived there the remainder of their lives.
During her earning years, Willa was manager of a Dry cleaning business where her talent as a seamstress served her well. As they grew up, her two sons often wore well-made clothes that had come from her loving hands.
Willa was a Believer in the Lord, Jesus Christ and was a member of Battlefield Assembly of God. She had served the Lord in various Assemblies of God churches over the years. Her avocation was simply to do whatever was needed to build the Kingdom of God wherever they lived. In recent years she served in the visitation ministries of James River Church, helping to see that each visitor to every service received a plate of cookies laced with the love that only a grandmother can bake into them. In later years she started the Greeters ministry at Battlefield Assembly of God, along with the Prayer Chain ministry. She also saw to it that each church member received a birthday card on their birthday. When someone was discouraged or facing some challenge it was Willa who sent them a note on cheery stationery. Sunday School teacher, Vacation Bible School worker, prayer meeting participant; these are but a few of her roles in recent years.
One of the subjects closest to Willa’s heart was any young mother needing a few things to help welcome a new little life into the world. She volunteered many years for Newborns In Need, a Springfield-based ministry designed to help provide assistance for needy newborns. Some items were purchased but many things were made by those same hands that had sewn outfits for her own kids growing up.
No one really saw Willa as an old woman because she didn’t act like one nor did she see herself as elderly. To the last she was involved in life. She was busy, active and effective in her Christian witness.
Willa was preceded in death by her parents, William N. Goss and Anna E. (Roper) Goss, four sisters, three brothers, her husband, Ernest H. Neill, and a daughter-in-law, Ruth Scott.
In passing to be with Jesus, she leaves those who love her and will mourn her passing:
Two sons; David Scott and his wife, Sylvia, of Memphis, Tennessee, John Scott and his wife, Shari, of Battlefield, Missouri,
Three grandchildren; Wendy Jones and her husband, Rick, Mike Scott and his wife, Jackie, Marshall Scott and his wife, Ileana,
There are seven great grandchildren and many dear friends who thought of Willa as family.
Funeral services for Willa will be Friday, November 21, 2014 at Greenlawn Funeral Home East. Burial will be at Greenlawn Memorial Gardens Springfield, MO following the service. Visitation will be from 5:00 until 7:00 p.m., Thursday, November 20, 2014 at the funeral home.