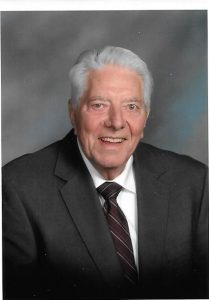 William August Harris age 91 of Branson, Missouri passed away August 10, 2016 at Cox Medical Center in Branson, Missouri
He was born on December 4, 1924 at Muskogee, Oklahoma the son of Louis Jacob and Ella Caroline Mehs Harris. He was a retired bus and truck driver. He was a longtime resident of the Springfield and Branson area and was a member of the Victor Baptist Church in Branson. He was also an U.S. Army veteran.
Mr. Harris is survived by his four children; Billie Harris of Branson, Mo., Barbara Harris-Huddleston and husband Stuart of Jefferson City, Missouri, David Harris and wife Susan of Branson, Missouri and John Harris and wife Patti of Springfield, Missouri. Eight grandchildren, 13 great grandchildren and four great great grandchildren. He was preceded in death by his parents, wife, Juanita Harris, a son, Jack Harris, one brother, Buddy Harris and a sister, Josephine Singleton.
Funeral services will be held at 2:00 PM, Monday, August 15, 2016 at Greenlawn Funeral Home in Branson with Pastor Kenny Robinette officiating. Burial will follow in Rivermonte Memorial Gardens in Springfield with full military honors.
Visitation will be at 1:00 PM, Monday until service time at 2:00 PM.
Memorial contributions in lieu of flowers are suggested to the Victor Baptist Church in Branson in his memory.