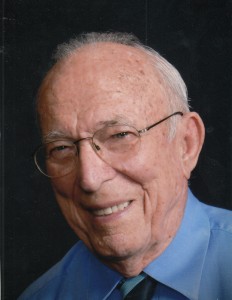 William Edward Winfree Jr., 91 went to be with the Lord on Thursday, March 3, 2016. “Bill” was born on December 31, 1924 in LaCrosse, AR. Son of William Edward Winfree and Cora Hamilton Winfree. He became a Christian in the early fifties at High Street Baptist Church and is a member of Baptist Temple. He was employed by O’byrne Electric, Midwest Electric and retired from Cox South. He loved the outdoors, particularly gardening.
He is survived by his wife of 72 years, Obera Gibson Winfree, two daughters; Sharon Irvine and husband Howard of Springfield, MO, and Patricia Hendrix and husband Delvan of Hallsville, TX, brother; James Winfree, grandchildren: Melissa Ousley and husband Tim, Michael Irvine and wife Dawn, Vance Hendrix and wife Jenifer, Ashley Hendrix and wife Anya, great-grandchildren: Andrew Ousley, Easton Irvine, Caden, Marin, Carolyn and Ian Hendrix, nieces, nephews and friends.
He was preceded in death by his parents and two brothers; Vernon and Boyce Winfree.
Visitation will be Monday, March 7, 2016 from 2:00 – 3:00 PM at Greenlawn Funeral Home North. Funeral service will follow at 3:00 PM. Burial will be in Greenlawn Memorial Gardens.