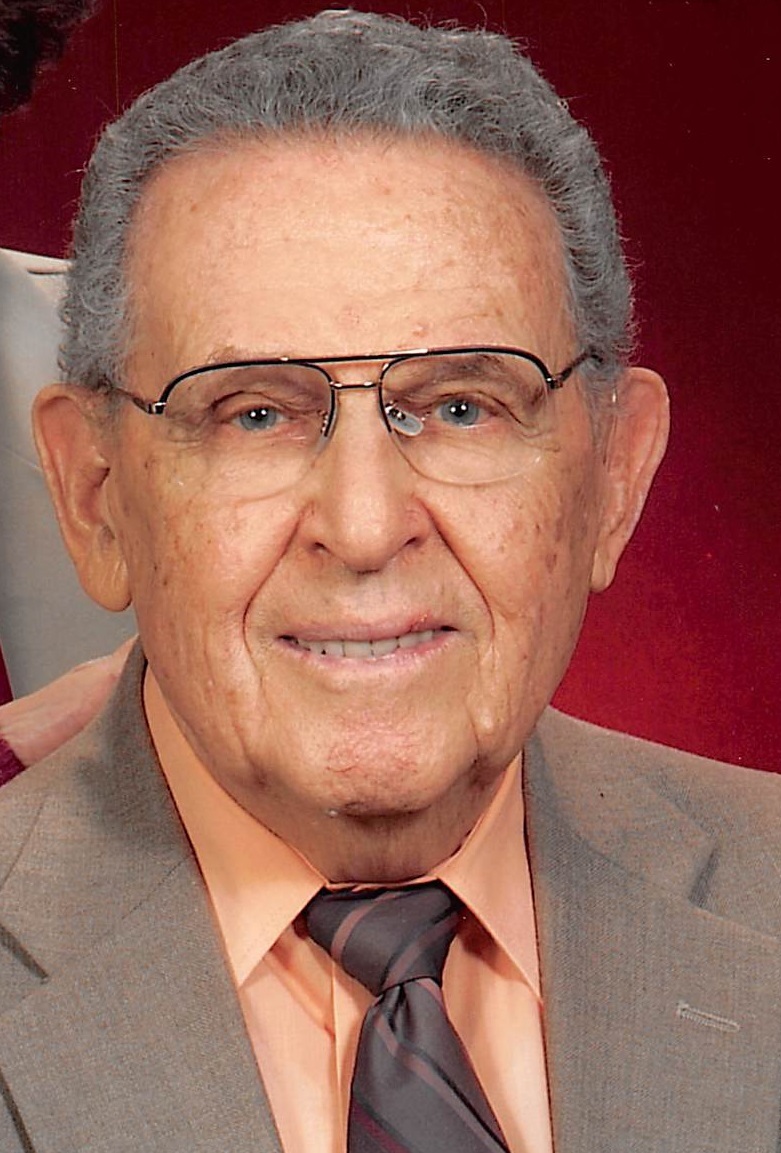 William Fredrick Farrand was born to Czar and Bessie Farrand on January 19, 1923 in Flint, MI. Known to all as Bill, he was the oldest of four children, two boys, two girls. He passed from this life on Tuesday, November 20, 2018 at age 95.
Bill accepted Jesus Christ as his Savior as a child and served Him gladly the rest of his life. After high school, he worked for the Severance Tool Company in Saginaw, Michigan for two years as a hand tool grinder. In World War II, he joined the Navy and was selected to attend the Aviation Ordnance Man School at the Naval Air Technical Training Center in Memphis Tennessee where he was an honor student. Including other assignments, he served with the Carrier Aircraft Service Unit 11 and that assignment sent him to Okinawa following the main offensive to take the island. It was there that Bill began to feel the stirrings to be a missionary. He told the Lord that he would stay to be a missionary, but when he told his Chief Petty Officer about his intentions, Chief Petty Officer told him that he had to return to the United States first. Six months after his honorable discharge, he moved to Green Lane, PA and began attending Eastern Bible Institute, the precursor to Valley Forge University. It was there he met a beautiful young Italian woman named Alvera Raguso. Following graduation, he married Alvera on November 24, 1949. The newlyweds moved to Boyne City, MI, where they pioneered and pastored a church successfully for two years. But they had a call to missions on their lives and subsequently joined the World Missions department of the Assemblies of God.
They began their service as foreign missionaries in Kandy, Ceylon, now Sri Lanka, serving from 1952-1957. It was there that their son, William, known as Wink, was born. Following their time in Sri Lanka, they returned to the states and headed up the native evangelism program for T. L. Osborn Ministries in Oklahoma, where a second son, Philip, was born. But soon they felt the tug to return to the mission field and boarded a boat to the Philippines in 1963, where they served the next 25 years, mainly in Bible college work.
After returning to the states in 1988, they served as missionaries-in-residence at Southeastern Bible College in Lakeland, FL and began making plans to move to Springfield, MO to retire. But they received a call asking them to help a Bible college in Fiji that was about to close. So, they packed their belongings once more, moved to the jungle-surrounded campus outside Suva, Fiji, and worked hard for three years to rebuild the college. They were finally able to appoint a Fijian president to the college and returned home to enjoy a well-earned retirement. Then they received another phone call – a Bible college in Sri Lanka needed their help. In 1994, they traveled back to where it all started, Sri Lanka, to help upgrade the Bible College there. In the summer of 1997, they left Sri Lanka and made one last trip to the Philippines where Bill taught a semester at the seminary in Baugio. Upon returning to the states in December 1997, they finally retired for the last time, their missions work spanning over 40 years.
During their times on furlough stateside, Bill earned a Bachelor’s degree in Bible from Central Bible College. In 1977, he earned a Master’s degree in Theology from the Assemblies of God Theological Seminary. In 1986, he earned a Doctor of Theology degree from Trinity Theological Seminary.
Throughout his life, Bill was a featured speaker and teacher to countless students in the Bible colleges where he served. In addition, during his bible college work, he began writing text books to assist students and he continued writing well into his nineties. Prophecy was his favorite topic but he also authored books on other theological topics as well as several novels. In his years in bible school work, he served in many capacities including President and Business Manager.
Bill was known as a gifted musician, an intelligent and kind man, and a wonderful storyteller. He had a quick smile, a warm laugh, and a welcoming personality. It was obvious to all that he loved God and loved people and wanted them to know Jesus Christ and all that he has done for them.
Bill is survived by two sons, Wink and wife Deborah of Fresno, CA, and Phil and wife Lynette of Fair Grove, MO; two grandchildren John Farrand and wife Melissa of Bakersfield, CA, and Elizabeth Beauchamp and husband Alan of Fair Grove, MO; and four great grandchildren Clara and Asher Beauchamp; and Stevie and Jack Farrand. He is also survived by numerous nieces and nephews and their families.
Because of Bill’s time serving in the Navy during World War II, he will be interned in the Missouri Veterans Cemetery in Springfield, MO.