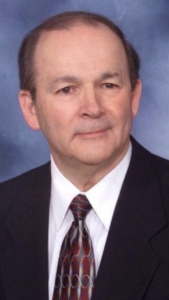 Rev. William John Tucker, 74, with his wife, children and close relatives with him, slipped the bonds of the temporal and entered into the eternal, glorious presence of his sovereign savior Jesus Christ on Tuesday, August 2, 2016. Born Dec. 9, 1941, in Akron, Ohio, son of William H. and Cloie A. Tucker, he grew up in Akron, Ohio, raising and riding horses with his Dad, a passion he enjoyed all of his life. He met his soulmate, Connie J. Burch in Springfield, MO while attending Baptist Bible College. They married in 1964, had three children, 10 grandchildren and enjoyed 52 years of a beautiful and loving life together. Heeding the Lord’s call to the ministry, John became the pastor of Faith Baptist Church in Hartville, Ohio in 1972 and served as the pastor there for 40 years. He was also instrumental in forming the Sovereign Grace Baptist Church Association, and was known for his expository and Christ exalting preaching. John was a kind and gentle man whose ministry and preaching is captured in the Apostle Paul’s statement in Colossians 1:28, “We proclaim Him, admonishing every man and teaching every man with all wisdom, so that we may present every man complete in Christ.” His knowledge of God’s word was immeasurable, and his ability to pray and communicate with the Lord profound. He truly enjoyed his walk with Christ and the fellowship he had with his congregation, fellow pastors, and Christian brothers and sisters. He will be dearly missed by all who were blessed to have known this great man of God. After John retired from the pastorate, he moved to Springfield, MO with his wife Connie, and enjoyed the remaining years of his life visiting his children, traveling with his wife and close friends, and pursuing his passion of studying theology and writing. John dearly loved his family and was so proud of all of them. Those left to cherish his memory and mourn his loss include his loving and devoted wife, Connie; son, Rev. John A. Tucker, Esq., and his wife Deborah of Alliance, OH; daughters, Jill C. Tucker and Heather B. Kelley of Hartville, OH; 10 grandchildren whom he adored, sisters Iva Jean Craddock and Anna Tucker of Akron, OH; his mother-in-law Darlene Burch of Springfield, MO and numerous other close relatives and innumerable friends. Predeceased by grandson Jack D. Kelley. The family wishes to thank all of the staff and doctors of the Neurological Intensive Care Unit at Cox Medical Center South for their kind and attentive care of John in his last hours. Calling hours will be held at Arnold Funeral Home, 504 W. Maple St, Hartville, OH 44632 on Thursday, August 11, 2016 from 5:00 to 8:00 p.m.; funeral service at 11 a.m. Friday, August 12, 2016 at Community Bible Church, 18146 US-62, Beloit, OH 44609. Pastor John A. Tucker will officiate, with internment to follow at Mount Peace Cemetery, in Hartville, OH. Flowers may be sent to the Arnold Funeral Home.