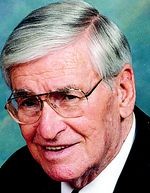 William Lee Huitt, known as Lee, died Monday, August 31, at the age of 89 following an extended illness. He was preceded in death by his parents, William Luther and Birdie Mae (Shaner) Huitt; and by his older brother, Luther Edwin Huitt. He was born March 5, 1920, in Bonne Terre, Missouri, four months after his father was killed in a lead mine explosion. When Lee was five years old, his mother, who never remarried, moved the family to St. Louis, Missouri. Birdie and her two sons attended the South Side Church of God in St. Louis, where Lee met Winifred Parrish, who became his wife in 1938 and remained his constant companion for more than seventy years. Lee served in the Navy during World War II, and returned to St. Louis where he worked for many years as a transportation sales representative. He was also active during those years in the South Side Church of God, and after retiring from his career in sales, he was ordained as a minister and served for fifteen years as pastor of the First Church of God in Springfield, Missouri. He is survived by his wife, Winifred; two sons, William and wife Sarah, Robert and wife Jan; eight grandchildren, James, William, Michael, Jeffrey, Eric, Robert, Callie and Sherry Hart; nineteen great-grandchildren; five great-great-grandchildren; numerous nieces and nephews, and countless people he considered family members. All who knew him were touched by his kindness, tickled by his humor, and taught how to love by the example of his life. Visitation will be Thursday evening, 6 until 8 at Greenlawn South Funeral Home. Funeral services will be 9 Friday morning at the First Church of God in Springfield, followed by burial at Veterans Cemetery. Memorial Donations may be made to First Church of God Building Fund, 720 E. Norton Rd., Springfield, MO 65803.