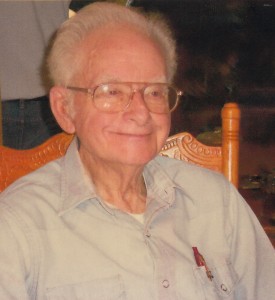 William Leon Farr, Sr., age 87, of Springfield, MO. went to his heavenly home on Thursday, November 12th , 2015.
He was born in Webster County, MO, in the Marshfield area on August 11th, 1928 to Charles C. and Anna (Mallatt) Farr. He was the 9th child born of nine children, seven sisters and one brother.
He married Wanda Glea Cashman on September 18, 1948; from this marriage, they had three children.
He accepted the Lord very early in his life and raised his family in the church. He enjoyed playing his guitar, singing and playing at churches, and family gatherings. He taught himself to play the guitar at an early age by listening to Chet Atkins on the radio. He also inspired others to play the guitar, teaching a few along the way.
He started a lifelong career of driving a truck early in his life, spending over 45 years as an over – the -road truck driver. William retired from Jones Truck Line in 1991. He traveled across many states and was known for his CB radio handle “FARGO”.
He spent these past years living in Republic, MO, enjoying his hobbies of woodworking, plowing gardens for others, tending his own garden, playing his music, and visiting with neighbors and friends.
He was preceded in death by his parents, sisters, and brother, and the love of his life Wanda, who passed away on September 16, 2007.
Survivors include his three children, Christine Wommack and husband Tom, Springfield, William (Bill) Farr, Jr. and wife Joanie, Jefferson City, and Earnest Farr, Sr. and friend Brenda Fleetwood, Springfield; eight grandchildren; twelve great-grandchildren; many nieces; nephew; and wonderful friends. His worldly presence will be missed by all.