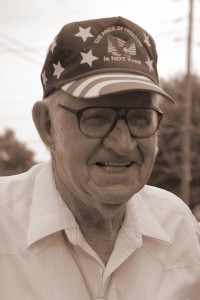 William “Bill” M. Easterly, Jr, of Strafford, Missouri, left this world on Wednesday, May 18, 2016 after a brief illness at the age of 97 in Springfield, MO. He was born to William M. and Lillie Belle Wilson Easterly on October 12, 1918 in Brookline, Missouri.

After graduating from Strafford High School, he worked for Frisco and was drafted by the Army and served during WWII. When he was discharged he returned home and married Eva Louise Bass on November 22, 1947, who preceded him in death on September 1, 1980. On December 10, 1981 he married Martha L. Campbell Fulbright.

Bill was a husband, a father, grandfather, and a great-grandfather. A war vet, mailman, mayor, an auctioneer, a farmer, a social butterfly, a bearer of piercing blue eyes and an easy smile. He was a habitual laugher and an adamant storyteller. He was a lifelong member of the Strafford United Methodist church, a proud democrat, and a constant presence in Strafford, Missouri and lived his life the way he wanted up to the time of his passing.

A visitation will be held Sunday May 22, 2016 from 2:00 p.m. to 4:00 p.m. with services to be held Monday May 23, 2016 beginning 1:00 p.m. at Greenlawn North, Springfield, Missouri. He will be laid to rest following the funeral with military honors at Bass Chapel Cemetery Strafford, Missouri. In lieu of flowers, the family requests donations be made to the Relay for Life of Strafford, Missouri, mailed to the American Cancer Society, 2926 E. Battlefield, Springfield, Missouri 65804.