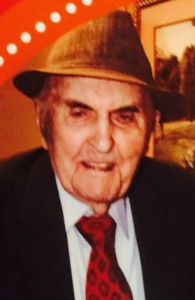 William Thomas “Tom” Allen was born July 8, 1917, at Turners Station, Mis­souri. He passed from this life at James River Care and Rehabilitation Center, Springfield, Missouri, on September 22, 2015. Tom was the son of Maudella May Plaster Allen and William Elmer Allen. He was preceded in death by his wife of 68 years, Agnes May Carter Allen; his par­ents; sister, Gladys Pursley; and brothers, Homer and Gilbert Allen; son-in-law Kenneth Frank Roach.
Tom spent his entire life in the Springfield area and served in the Civilian Conservation Corps in 1934-1935. He was employed with Ash Grove Cement Com­pany retiring in 1974 and served as an officer in the Ash Grove Gypsum Union. He was the last surviving member of the original Sequiota School Board in the early 1950s and the reorganized Kickapoo R-7 School District in 1953. He was an avid horseshoe player and won 1st place in the World Championship com­petition. He was an avid St. Louis Cardinal fan and coached his grandson’s baseball team, “The Police Bullets.” Tom was a faithful member of Southside church of Christ, having been baptized into Christ in 1952. He is also the last founding member of the con­gregation which began in 1953. His genuine character provided strength and encouragement through the years by his faithfulness. He served as a deacon for many years and provided assistance to the congrega­tion as well as to others throughout the community. His shining light has always been a beacon and com­fort to family and friends.
Tom is survived by his two children, Garolyn Sue Roach, Springfield, Mo., and Thomas E. Allen and his wife Julie, Tulsa, Okla.; five grandchildren, Mark Kenneth Roach, Kent Allen Roach, Carter Davis Al­len, Mary Ella Allen, and William Thomas Allen II. Four great-grandchildren survive: Zachary Marc Roach, Sophia Justine Roach, Quinton Elliott Roach, and Ethan Thomas Roach. Also surviving are two sisters, Helen Carnall, Ozark, Missouri, and Hazel Lawson, Sparta, Missouri, as well as many nieces, nephews, and cousins.
Services will be at 11 A.M. Friday, September 25, 2015 at Greenlawn Funeral Home East with Robby Davis and Mark Roach officiating. Visitation will be held 6 to 8 P.M. Thursday in the funeral home.
In lieu of flowers contributions may be made to the charity of one’s choice.