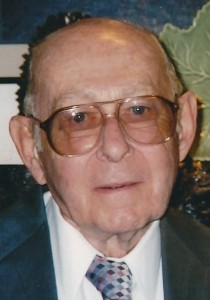 William “Bill” Thomas Miller, Jr., 90 years old, was born in Chicago, Ill., October 23, 1924, and joined his Heavenly Father on March 30, 2015.Bill grew up as an only child in Chicago. He attended Lane Technical High School and shortly after graduation went to work for Zenith Radio Corporation in Chicago. He rose to Chief Production Engineer and was instrumental in choosing Springfield, Mo., as the city to build their next production plant in 1967. Bill moved his family from Chicago to Springfield, and retired from Zenith after 42 years of service.Bill was blessed with many skills. He was a handyman at home and enjoyed woodworking. He supervised and worked on many construction projects at Cherry Street Baptist Church and the church camp.Bill was preceded in death by his father and mother, William T. Miller, Sr. and Sarah E. Miller; his first wife, Christine E. (Block) Miller; and his second wife, Marian J. (Foote) Miller.He is survived in this earthly life by his children Susan (David) Harris, Steven (Susan) Miller, Daniel Miller, Donald Miller, Paul (Lee) Miller, and Cliff Miller; step-children Gail Long, Jean Barnett, June Imhoff, Pamela (David) Roy, and numerous grandchildren and great-grandchildren.
Visitation will be held at Greenlawn Funeral Home East, 3540 E. Seminole, Springfield, MO, on Wednesday, April 1, 2015, from 5:30 to 7:30 p.m. Funeral services will be conducted on Thursday, April 2, 2015, at 2 p.m. with interment following at Greenlawn Memorial Gardens.In lieu of flowers, donations may be made to Seasons Hospice, 1831 W. Melville Rd, Springfield, MO, in gratitude for their exceptional care.