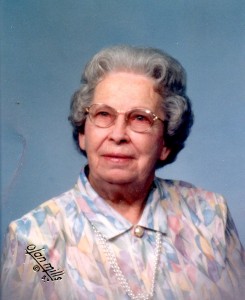 Wilma Marguerite Barton 96, Of Springfield passed away December 30, 2014. She was born near Mt. Pleasant, Iowa on February 27, 1918, the fifth daughter of Clark and Amelia zickefoose. At 14, she trusted Christ as her personal Savior.
After a course at Iowa State Teachers College, she began a teaching in a one room country school. In that community she met Dale Barton and they married August 14, 1937.
In 1950 Dale and Wilma dedicated their lives to be missionaries. It took a giant step of faith to exchange the secure life on the farm for their family of three girls and one boy for the uncertainty of life in a foreign country.
She graduated from Baptist Bible College, Springfield, MO. in 1953 and received her Honorary Doctor of Humanities in 2005. Their family went to Brazil in 1954, learned Portuguese, and in 25 years started many churches, directed the Bible Institute and trained many pastors.
Even though they had to leave Brazil in 1979 because of Dale’s health, she went back numerous times to be with her missionary daughter, Janet Tomberlin and Gary and their family, and to see her old “ young people “. She loved teaching young people.
She was preceded in death by her husband Dale, son Curtis, her parents, five sisters, and one brother. She is survived by 3 daughters, Barbara Brown ( Mel ), Springfield, MO; Janet Tomberlin ( Gary ) Curitiba, Brazil; Judy Eckles, Brownwood, TX; 8 grandchildren, 18 great grangchildren and their families.
Visitation will be held Friday January 2, 2015 at 6:00 p.m. with funeral services starting at 7:00 p.m. at Greenlawn Funeral Home South. A visitation will also be held Sunday, January 4, 2015 from 6 p.m. to 8 p.m. at Olson Funeral Home in Mount Pleasant, Iowa. Funeral services will be held at Olsen Funeral Home Monday January 5, 2015 at 10:00 a.m. with the burial to follow at Lambirth Cemetery.