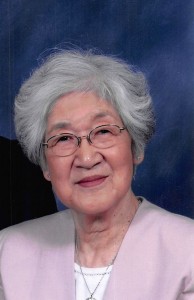 Yoko Goodin, age 88 passed away May 5, 2016 in Springfield, MO. She was the oldest child born to Shigeo and Teruko Hasegower on July 20, 1927 in Hakodateshi, Hokkaido, Japan. When her father passed away at the age of 44 her mother started a coffee shop to support Yoko and her two sisters. Her dream of a college education ended when World War II began. After working at Mesawa Air Base for 15 years as a seamstress and typist she met Henry Goodin, a handsome American soldier, they were married at the American Embassy in Sapporo, Japan on May 23, 1963. They had one son, Raymond Goodin. Retiring in 1965 from the Air Force Henry moved his family to his native Missouri. Yoko began working at Barths in 1972 on the Springfield square tailoring men’s suits and remained there until the business closed. Yoko was an active member of First Baptist Church of Battlefield where she was a member of the Harmony Sunday School class. She enjoyed cooking, gardening, sewing, and floral arranging in both Japanese and American styles. Yoko was known for her love and devotion to Henry and Raymond, her egg rolls, her pies, being a meticulous seamstress and her kind and gentle sweet spirit. She loved her Savior and wanted others to know Him as she did. Preceding her in death were her parents, two sisters, and her devoted husband Henry. Yoko is survived by her son Raymond Goodin of Springfield, her very dear and close friends, and her church family. A special thank you to Yoko’s hospice nurse Karolyn, for her loving care and compassion. Services for Yoko will be Monday, May 9, 2016 at 11:00 a.m. in Greenlawn Funeral Home South with visitation one hour prior to at 10:00 a.m. in the funeral home. Burial will follow service in White Chapel.