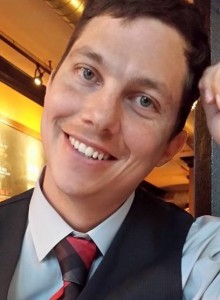 Aaron J. (Bees) Wallace went to be home with his Lord, Monday, April 18th, 2016 at 8:42 am after a long battle with cancer. He was home and surrounded by family.
Aaron was born August 13th, 1985 in Herleen, Netherlands to parents Carl and Sandra (Ramos) Wallace. He married his wife Valan (McAffrey) Wallace on October 22, 2011.
He is survived by his wife, 5 year old daughter, Olivia Wallace, their family dog, Clutch, his parents, a brother, Chuck Wallace, Uncle Allen and his wife Lisa (Smith) Wallace and their kids Alex and Kyle, all of Springfield, Missouri, grandparents, Charles and Peggy Wallace, of Osage Beach, his Aunt Shirley Ramos and fiancee Preston Davis and her kids Tyler and Noah of Fort Smith, Arkansas, Uncle Eugenio “Gene” Ramos Jr. of Van Buren, Arkansas, many other cousins and a host of friends that were family.
He is preceded in death by his grandmothers, Joan (Rose) Wallace, Elfriede (Gudat) Ramos, grandfather, Eugenio Ramos Sr., great-grandmother Frances (Bradley) Wallace, and sister-in-law, Jennifer (Ingram) Wallace.
A celebraton of Life will be held Friday, April 22, 2016 at 3:00 pm. at Greenlawn Funeral Home East.
A special thank you to the staff of Mercy Oncology and to Haven Home Health for caring for him in this journey.
In lieu of flowers contributions may be made to www.gofundme.com/aaronbeeswallace for Olivia’s future.