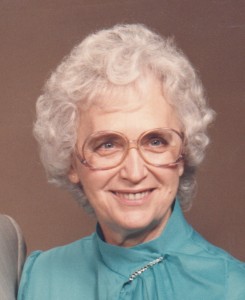 Altah Snodgrass passed away Wednesday September 8, 2015 after a lingering illness. She was best known for her love of family and her cooking skills. Altah was very proud of her grandchildren and great-grandchildren plus great-great-grandchildren. She liked to share their pictures and loved to display those pictures in her home. She was preceded in death by Eugene, her husband of over 69 years; her parents; her oldest daughter Carol Smith; and two grandchildren: Ron and Aaron Smith. Survivors are daughter Deborah Cantrell; grandchildren: Zanita and husband Robert Esther, Cherri Stockstill and Gretchen and husband David Drury; Becky Schuchardt and Lisa Smith; great-grandchildren: David Smith, Erica and Ed Howard, Garrett Smith, Amber and Mark Timmerman, Adam Arnold, Michael and Lisa Esther, Kelsey Esther, Joshua and Kelly Stockstill, Zachariah Stockstill, Malachi Stockstill, Nick Drury and Grace Drury. Plus six Great-great-grandchildren: Chloe Esther, Dax Aaron Howard, Noah, Riley Stockstill, Peyton and Raeghan Timmerman. Visitation will be at Greenlawn Funeral Home North on Sunday September 13, 2015 from 6:00 to 8:00 pm. The Funeral service will be conducted by Brother Jimmie Kendrick on Monday at 10:00 am also at Greenlawn Funeral Home North. With burial to follow at Greenlawn Memorial Gardens.