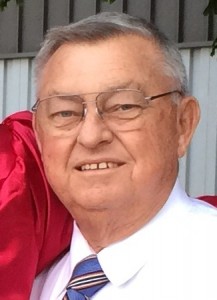 Alvin Clifton went home to be with his Lord on Wednesday, September 23, 2015. Alvin was a lifelong resident of the Springfield area, born to Alvin and Mary Clifton.
Alvin was a contractor and loved creating and building, especially alongside his son and son in-law. Alvin was a member of UHBC serving as a deacon and trustee. Throughout his life, church and family were dearest to him.
He is survived by his wife of 51 years, Grace; his daughter, Lori Matthews and husband Todd; his son, Sam Clifton and wife Michelle; grandchildren, Ryan and Connor Matthews and Taylor, Dustin, and Nathan Clifton; and his siblings, Joan Chapman, Bob Clifton, and Carol Clifton.
A memorial service will be held at 4:00 p.m. in University Heights Baptist Church on Sunday, September 27, 2015. Arrangements have been entrusted to Greenlawn Funeral Home South, Springfield, Missouri.