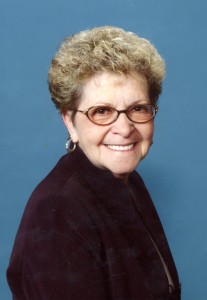 Arena V. (Lorenz) Hay 77, affectionately known as “Mimi” to many, of Nixa, Missouri went to be with her heavenly father Monday, May 25, 2015 after suffering a stroke. Arena was born December 15, 1937 in Enid, Oklahoma the 2nd of four children to Edmond A. Downey and Hester A. (Houston) Downey. Arena’s mother was an Assembly of God Minister and Arena was raised in a Christian home, involved at an early age teaching Sunday School classes and leading children’s church.
Arena graduated from Houston High School in 1955. She then attended Evangel College for two years before heading into the workforce as a full time key-punch operator in the accounting department at the General Headquarters of the Assemblies of God.
The highlight’s of her life was the birth of her son Martin (Marty) C. Pickney and daughter Tamara D. Pickney and she reveled in that joy as a “stay at home” mom. Arena knew at an early age that she wanted to be a school teacher and this dream never waned as she returned to college and finished her bachelor’s degree in elementary education then going on to receive a master’s degree as well. She realized her dream in 1971 when she started her 31 year teaching career in Springfield before moving to the Reeds Spring school district for four years. She then returned to the Springfield school district working her remaining 26 years at Hickory Hills Elementary teaching kindergarten, 1st, 3rd, and 5th grades. During her career Arena was profiled in Springfield Magazine and had several feature stories written about her unique classroom activities in the Springfield News-Leader & Press. She also did television interviews with both KOLR and KY-3 regarding programs being taught in her Hickory Hills classroom. As adults both of her children followed in their mother’s footsteps entering the elementary education profession which was a great source of pride for Arena. After she retired in 2002 Arena continued to assist many other teachers including both her son and daughter as a mentor and an aide in their classrooms. She also spent many hours working to help start a charity organization for foster children called Sammy’s Window.
Arena is preceded in death by her mother Hester A. (Houston) Downey and father Edmond A. Downey, brothers Edmond “Bub” L. Downey and Joseph O. Downey. She is also preceded by husband Carl H. Lorenz (2004) and husband Samuel L. Hay (2008). Arena is survived by her son Martin (Marty) and his wife Etta and their daughters Abby and Sarah of Richland, Missouri, daughter Tamara and her husband Jeff Saddler of Ozark, Missouri, and their daughter Chelsea Campbell and her husband Joel and their son Jaxson of West Des Moines Iowa, sister Judy Parkhurst and her husband Richard Sedalia, Missouri along with many nieces, nephews and good friends.
A celebration of Arena’s wonderful life will be held at Greenlawn South Funeral Home Sunday May 31st from 2:00 to 4:00 P.M. Graveside services will be held Monday, June 1st at 11:00 A.M. at the Missouri Veterans Memorial Cemetery on Evans Road Springfield, Missouri. In lieu of flowers, memorial contributions can be made on behalf of Arena V. (Downey) Hay to Evangel University 1111 North Glenstone Springfield, Missouri 65802 or contact the office of Institutional Advancement at 417-865-2815 extension 7290.
Our “Mimi” touched the lives of so many people. Whether it was in her classroom or throughout the course of her life, she was always teaching, helping and doing for others. She will be greatly missed by her family and by all who knew her.