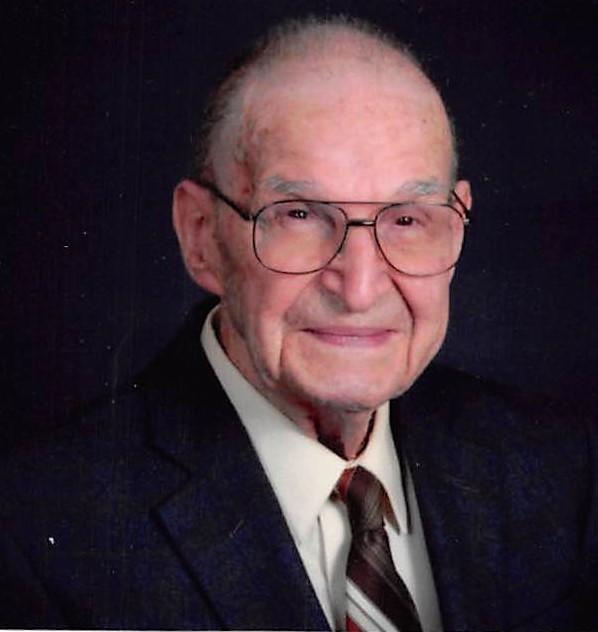 Arnold Monroe Montgomery was born to Oscar Monroe Montgomery and Minnie Eldeman in Crossett, Arkansas on April 11, 1918. At the age of five he moved with his parents to the Green Forest community east of Poplar Bluff where he attended Black Creek, a one-room school, through the eighth grade. He then went to high school in Poplar Bluff where, yes, he walked five miles one way each day. Growing up as a farm boy, upon graduation, Arnold moved to the big city of St Louis to seek his fortune.

Falling into a career as a watchmaker, in just a few years Arnold found himself working in Fort Smith, Arkansas. One Sunday he was attending a Church of Christ revival meeting in Jenny Lind. As he got off the bus, Vaulta Marie Smith turned to her friend and said, “There’s the man I’m going to marry.” And she did…in 1939. To this union two daughters were born, Leigh and Patricia Marie. Arnold and Vaulta relocated to Poplar Bluff where Arnold, along with Rex Taylor, established a watchmaking school. From 1949 to 1950 he served as Missouri State Representative from Butler County. He later owned a lumber company where he built a subdivision in the Green Forest area. During this time Arnold took up a life- long hobby of photography.

Arnold moved his family to Springfield, Missouri in 1954 where he set up a watch repair desk behind the escalators in Heer’s department store on the square. After over 30 years in the jewelry business, he decided to try his hand as a stockbroker and went to work for Dempsey Tegeler. However, that lifestyle did not suite him, so he returned to his former career as manager of the jewelry department in the new Venture store on S Glenstone. He retired as District Jewelry Manager in 1980.

Arnold began preaching at the age of 16 and was ordained by the elders of the Oak Street Church of Christ in Poplar Bluff. For most of his life he worked six days a week and preached two sermons every Sunday. He traveled to various churches in Southwest, Missouri, but most notably to Bona where he preached for 18 months. For a period of time he also was the pulpit minister for West & Lincoln Church of Christ. A long-time member of South National and East Sunshine churches of Christ, Arnold discovered that he preferred teaching over preaching. He was honored to lead the Young at Heart class in discussion for 20 years. He was a member of the Sunset congregation at the time of his death.

Arnold had many hobbies and interests that he enjoyed in retirement, including fishing, woodworking, photography, oil painting, gardening, traveling, teaching investment classes, reading, and studying religion and philosophy. Following a full wonderful life, Arnold passed away peacefully at the age of 101, on January 30, 2020.

He was preceded in death by his wife, Vaulta, of 75 years and his daughter, Leigh Nelson, who passed away in 2007 at the age of 61. He is survived by his daughter, Patricia Pendleton (Billy); three grandchildren, Christy Michael (Dennis), Sean Bair, and Jennifer Nelson (Bobby); four great- grandchildren, Talina King, Kaylee and Zackary Hardcastle, and Ashlyn Bair; two great-great-grandchildren; sister-in-law, Frances Davis of Albuquerque; nieces Michele DeValle and Jeri Salazar; and nephew, Stuart Davis.
Arnold also leaves behind a slew of devoted friends that include David Dockery, James Vermillion, Betty Upp, Jo Brammer, Joyce and Joy Wilson, and Wendell Willis of Texas.

The family will greet friends and family at 1:00 p.m. on Saturday, February 8 at Greenlawn South Funeral Home, Springfield, Missouri. Services will follow at 2:00 with Dwight Samuel and Venton Haskins officiating. Song solo by Robby Davis. Burial will take place on Monday, February 10 in the Montgomery Cemetery in Poplar Bluff, Missouri.