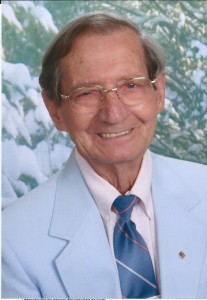 A Funeral Mass for Arthur Eugene Siler age 87 of Clever, Missouri formerly of Branson West will be held at 10:30 AM, Monday, April 27, 2015 at St. Joseph’s Catholic Church in Billings, Missouri with Fr. Augustine Njuu officiating. Burial will follow in the Missouri Veterans Cemetery in Springfield with full military rites. Arrangements are under the direction of Greenlawn Funeral Home in Branson, Mo.
He died April 21, 2015 at his home in Clever, Mo.
He was born on October 14, 1927 in Cherry Valley, Arkansas the son of Leeman and Sylvia Cade Siler. He was an U.S. Army veteran serving during World War II. He was retired from the paper mills where he was a lab specialist. He was a member Third Degree of the Knights of Columbus and was a member of St. Joseph’s Catholic Church in Billings and also had attended the Our Lady of the Cove Catholic Church in Kimberling City and Our Lady of the Lake Catholic Church in Branson.
Survivors are his wife; Carmelita Rumler Siler of the home in Clever, Mo., three daughters; Barbara Olsen of Muskegon, Michigan, Nancy Rebeschini of Newark, Deleware and Barbara Kyprainou of Atlanta, Georgia. Three sisters, Juanita Williams of Michigan, Joyce Bromley and Charlene Deeds both of California. A step-sister Kay Franks of Arkansas. Seven grandchildren, six great grandchildren and two great great grandchildren. He was preceded in death by his parents a daughter, Shirley Wentzloff and a brother Floyd Siler.
Visitation will be on Sunday, April 26, 2015 from 2:00 until 4:00 PM at Greenlawn Funeral Home in Branson.
Memorial contributions are suggested to the American Lung Association or the Veterans Transportation Fund.