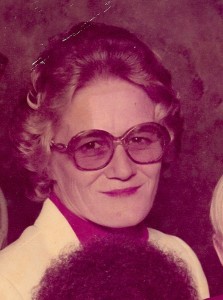 Avagene Schmitt, age 79, of Nixa, MO, passed away Wednesday, September 30, 2015, in her home. She was born May 6, 1936, in Polk, MO, to James and Jennie (Redd) Hale. She was united in marriage to Bill Shay in 1954, and to Willard Schmitt in 1976. She is of the Baptist faith.
She was preceded in death by her parents; her first husband Bill Shay; her second husband Willard Schmitt; and nine brothers and sisters.
She is survived by three children: Shirley Carter of Nixa, MO; James Schmitt of Nixa, MO; and William Shay of Springfield, MO; four grandchildren and six great grandchildren; one sister Elma Marshall of Bolivar, MO; two brothers: Orlan Hale and wife Evelyn of Bolivar, MO, and Carl Hale and wife Trudy of Salem, MO; as well as numerous other relatives and friends.
Graveside services will be held at 2:00 PM Sunday, October 4, 2015, at Mt. View Cemetery Polk, MO, with Chaplain James Friend officiating, burial will follow. Visitation will be held Saturday, October 3, 2015, from 3:00 to 5:00 PM in the funeral home. Online condolences may be made at: www.greenlawnfuneralhome.com. Arrangements have been entrusted to Pitts Chapel Bolivar, MO.