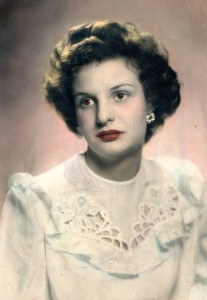 Bernice Thelma Twomey lived a long, fulfilling life of 89 years and peacefully passed on October 13th, 2015 from natural causes. She was born on August 21st, 1926. Bernice was preceded in death by her parents, Patrick and Gladys Keen, her husband Sam, sister Kathaleen, and two of her children, James and Linda.
Bernice was born in Springfield, Mo., but moved to Chicago, Ill., as a teen. She began her career as a telephone operator for Illinois Bell alongside her mother. She retired from Zenith after 20 years of dedicated work. Upon retirement, she was finally able to spend all of her time, lovingly taking care of her special needs daughter, Kathy. Bernice was a lifetime member of the Church of Christ and attended East Grand for 48 years.
Bernice met and married Sam Twomey in 1954. They blended their families by legally adopting each other’s children, then later had their own daughter Patricia. Bernice is survived by her daughters, Kathy and Patricia, as well as her son, Sam. She is a grandmother to eleven: Jeffrey, Rachel, Amy, Kimberly, Stacey, Kevin, Brandi, Katie, Zachary, Tyler, and Seth. She is also a great grandmother to eight: Jessica and Jacob Garrett, Courtney, Markeese, Jacob and Sarah Barnts, Abby, Ahylssa and a great-great grandmother to three, Ian, Alexandra and Jayceon. She is also survived by many nephews and nieces, relatives, and friends.
A visitation will be held from 4 to 6 p.m. on Sunday, October 18, 2015 at Greenlawn Funeral Home South 441 W Battlefield, Springfield, MO.
Bernice spent the last several years enjoying the companionship of her beloved pets Aalok and Daxter. In lieu of flowers, the family is requesting that donations be made to C.A.R.E. Animal Rescue at 1328A W Sunshine St. They can be reached at 417-875-8565 or carerescue.org.